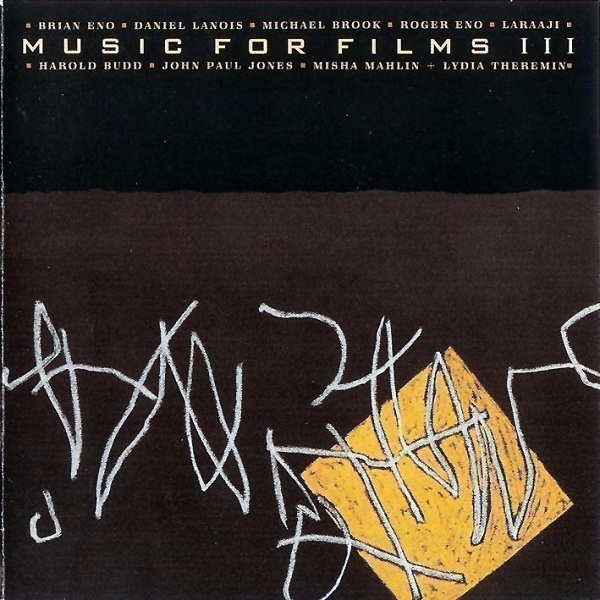 The All Saints label began as a veritable home for the electronic, ambient inclined artist who needed a new vehicle to deliver a powerful message. Music for Films III is a sampler of these artists where the context for each composer has only been altered slightly to fit celluloid rather than CD. Brian Eno had already embraced the concept ten years prior and is represented by a set of three solo recordings (also featured on his acclaimed Ambient boxed set) as well as three joint pieces with Daniel Lanois (best known for sharing a Grammy while working for U2). Michael Brook gets to show off his guitar effects system during a live performance recorded in Berlin on "Err." John Paul Jones offers a rare track that emphasizes looped saxophones to create a tone of urgency. Brian's brother Roger donates a solo piece and a collaboration on "Fleeting Smile" and "Theme for Opera," driven by a piercing wall of synths. The sleeper track from the fifteen pieces is by Misha Mahlin and Lydia Kavina, "For Her Atoms," a solemn drone that does not dominate the sound horizon. Almost all tracks have undergone studio treatment as part of their post-production efforts in Eno's Suffolk studios. As a label sampler that is now being distributed from Voiceprint in the UK, now is the opportunity to direct a keen focus to a label full of textural riches, which unfortunately was easily overlooked the first time around.