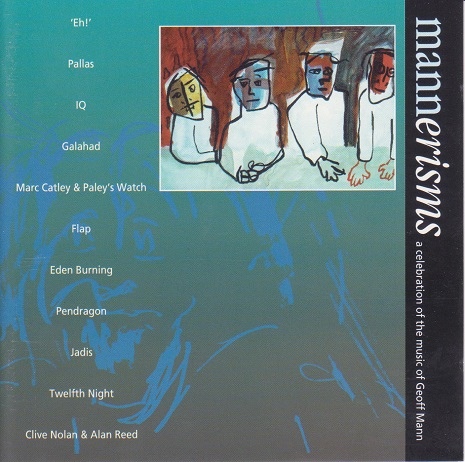 Priest and painter, Geoff Mann was also once the lyricist and vocalist for the English progressive band Twelfth Night. He died of cancer in February of 1993. To memorialize his life, musicians who knew him and those with whom he had worked contributed songs that he had written or performed. Mannerisms includes performances by IQ, Pendragon, Twelfth Night, Pallas, Eh!, Galahad, Flap, Jadis, Eden Burning, Clive Nolan and Alan Reed, and Marc Catley and Paley's Watch. If you are a fan of neo-progressive or the aforementioned groups, then this disk is for you. Aside from the tunes performed by Eden Burning and Marc Catley, which are soft acoustic pieces, this disk features some intense music. In my estimation, the IQ, Pendragon, Pallas, and Flap tunes clearly stand out above the rest. Aside from some moments that are a bit poppish for my taste, the song by Clive Nolan and Alan Reed is a thoughtfully structured piece that slowly unfolds into a nice, albeit too brief, crescendo. Not only does this disk have enough good music to make it well worth buying, it also supports two worthy causes: half of the proceeds go to cancer research and half to Geoff's family. The artists contributed their services without charge, as did many of the studios in which the songs were recorded, which is a refreshing change for us consumers. The booklet features a synopsis of Geoff's life, background information on the contributing bands, photos of Geoff in his various roles, and a discography.