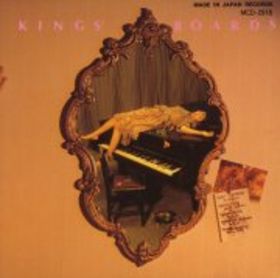 This compilation disc features a single cut from each of five budding young Japanese synthesists, who are backed by various members of White Fang, Seilane, and Social Tension. The backing support is mostly bass and drums (no guitar), and they generally play adequately but stay well out of the way of the featured artists. Motoi Sakuraba's entry is a whirling piano-driven piece full of strong melodies and syncopated runs, similar to Minimum Vital or Kit Watkins. Shigetomo Hashimoto offers a light wispy number with lots of flute-like lead lines and punchy brass hits, but the energy level is so low here, and the rhythm section so basic that the song fails to generate much emotion. Stepping out from her band Rosalia, Naomi Miura's track is the gem of the album – she proves herself very capable in a heavily male-dominated genre. Based on a recurring, unusual lopsided groove she sprinkles killer CX-3 organ lines all over the place. Even though the obligatory Emerson references abound, the music is still fresh and full of life, all the while maintaining a very distinct analog feel. The last two cuts, by Manabu Kokado and Kodomo Endoh respectively, are rather weak in comparison. Manabu's piece is a virtual Tony Banks rip-off and Kodomo's is so basic and amateurish it sounds like Kitaro trying to go prog-rock. All in all, the most surprising thing about Kings' Boards is the virtual lack of all-stops-out soloing. With the exception of the first and third tracks, the keyboards are only used to provide melodies and lead lines but the music constantly begs for more. Fortunately, two of the artists deliver the goods. With some reservations, this album should appeal to keyboard aficionados but it's not as strong as its reputation and certainly not in the same league as some of the other young Japanese artists like Il Berlione or Happy Family.