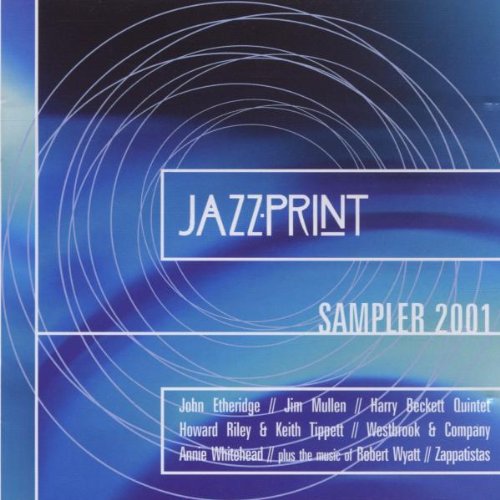 The UK’s Voiceprint label has done well to carve a niche as a purveyor of lost archival recordings both from Canterbury artists (Soft Machine) and 80s alternative bands (the Alarm, All About Eve). To emphasize the jazzier side of their reissue campaign, Rob Ayling chose a set of representative tracks from his acclaimed releases. The first song is a live rendition of Robert Wyatt’s “P.L.A” from the Soup Songs collection of recordings. Ex-Soft Machine guitarist John Etheridge follows with a blues track from his early 90s disc, Ash. Jim Mullen and Howard Riley each get multiple tracks distinguishing their choice discographies. Mullen’s work is heavily steeped in blues while Riley has been touted as one of the fathers of the British free jazz scene since the 60s. Also spotlighted here is a telepathic duet, “Interchange,” where Riley is paired with the other vanguard of the scene, Keith Tippett. Probably the most significant piece on the disc is Mike Westbrook’s “Riding down to Platterback.” This song fits into a cabaret vocal style that masks the complex arrangement of the piece by relying heavily on accordion. Next up is Annie Whitehead’s “Alien Style” single from early 80s, which is an excellent ska-based piece too. Closing out the disc is the opening medley of pieces from the Zappatistas Live in Leeds tribute, reviewed elsewhere this issue. Overall the collection of tracks warrants further inspection by jazz enthusiasts and serves as a worthy introduction to a catalogue that is only deepening in quality.