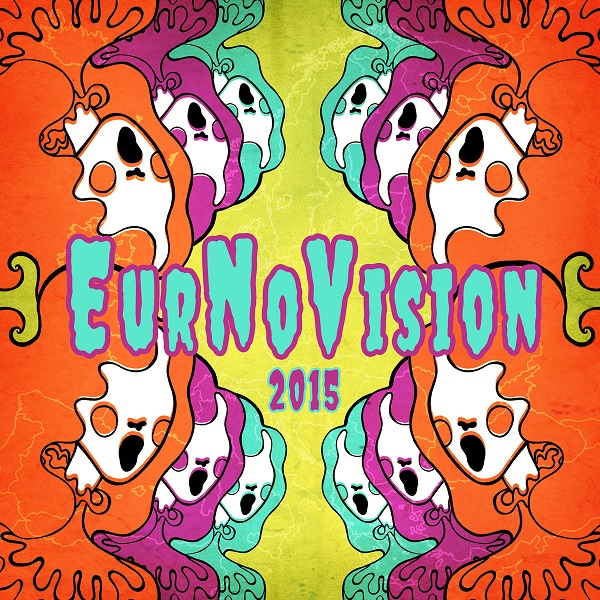 Compilations are a great way for getting exposed to new bands and a wider variety of music. EurNoVision is a compilation presenting 20 tracks by 20 underground bands from 20 different European countries and disputed territories like Scotland and Catalonia. EurNoVision is intended to be the inaugural release of an annual compilation on a variety of formats. The majority of the bands presented here recorded music specifically for this compilation. However, a couple of artists like Felix Kubin & Matthias Brosch (Germany) provided “Cassandra Calling” that they recorded in 1985, and Kompleksi’s (Finland) unreleased track “(e)motions.” The music on this disc spans a variety of genres from electro disco – techno – post punk – pop psych; there is a little bit of something for everyone. As with most compilations, listening to it is like riding a roller coaster. There are some incredible highs and some lows not worth mentioning. The high points for me include Austria’s Just Friends and Lovers’ energetic post punk “Isaac,” Hungary’s Morningdeer’s “This Time,” a dark brooding song akin to Lydia Lunch that eventually turns interesting and experimental with some odd sounds, “Cassandra Call” sounding a bit like Der Plan and Pyrolator, Dion and the Magic Chords’ (Netherlands) sequencer-driven “Synchroniziztät” sounding like Eno-era Cluster, Catalonia’s Motor Combo’s “Magnetic Message” sounding like man-machine Kraftwerk, Clockwork Orchestra’s “Don’t Listen to the Ghosts” with its cheesy organ riffs reminding me of Young Marble Giants, Echo Beatty’s (Belgium) “Knots” with its gothic-psych vibe, England’s Cleaners from Venus’ “The Rose of the Lanes” 60s Brit pysch-pop sounding like a combo of the Bee Gees and the Hollies, Kodagain’s (Serbia) inventively titled “Berlusconi Stole My Teenage Girfriend” that is far too short, and the best song on the disc, “B Parigi” by Italy’s Spaguetta Orghasmmond. “B Parigi” is an amalgamation of electro, pop, horror, and Italian progressive. The tune is very catchy and there is even someone whistling. So, if you are in the mood for exploring strange new musics, be sure to check out EurNoVision.

Jean-Philippe Goude - Drones – Jean Philippe Goude played keyboards in Bernard Paganotti’s band Weidorje until 1979. At that time he recorded Drones and involved the various musicians he had worked with: Klaus Blasquiz,...  (1994) » Read more