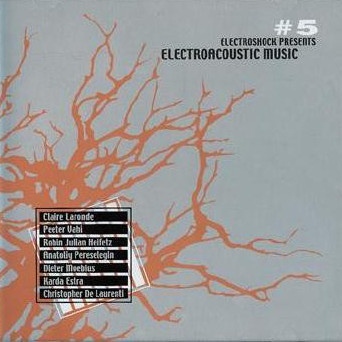 In these days where electronic music is generally thought of as mindless dance beats with sampled accents, it’s important to remember that the pedigree of electronic music goes back many decades before Moby, Chemical Brothers, and even Kraftwerk and Tangerine Dream. The earliest experiments came from modern composers pushing the boundaries of music, more from laboratories than studios. Electroshock Records seems to be in the business of reminding us of this fact. Here they present their fifth sampler (the first I’ve heard) of the current generation in this long tradition. Here are seven examples from a wide variety of origins all over the world, some more successful than others. Claire Laronde from France starts things off with “Vibration de la Matiere,” a fascinating fourteen-minute succession of abstract sounds, many from recognizable sources (piano, violin, marimba), many completely unrecognizable. Estonian Peeter Vähi’s “Fugue and Hymn” is a strange combination of a processional march for brass accompanied by electronic noises. The oldest piece on the CD is from 1980, “Anatomy of Chase” by American Robin Julian Heifetz. It’s an insistent workout for analog synthesizers, sort of a mutated dissonant electronic Philip Glass. Anatoliy Pereselegin contribute the unusual “Model #1. A Violin and Virtual Orchestra,” which presents some virtuoso violin playing backed by intense noises that sometimes resemble real instruments and are sometimes just a wall of noise. My only complaint about the collection is the complete lack of liner notes. How were these works produced? Who are the musicians (if there are musicians)?