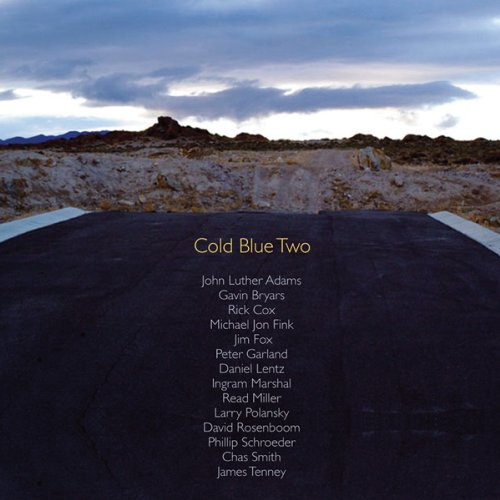 The Cold Blue label has been around since the early 1980s, producing a number of excellent vinyl releases, then a few years later they folded up shop, only to re-emerge as a CD label a decade later maintaining the same high standards and musical focus, with many of the same artists. This compilation, featuring fourteen different pieces by as many artists is an excellent way of introduction to their “sound.” Most of the material here falls into what could be considered new-classical, chamber, minimalist or post-minimalist music, essentially a composer’s forum for new ideas on not-so-easy to categorize musical fronts. Most of these artists were based in Southern California originally, where the label itself is from, but that’s certainly no longer the case; Gavin Bryars, for example, is from the UK and has a large body of varied classical work to his credit. Daniel Lentz is another innovative composer with a large body of work on many different labels; his offering here, a piece for multi-tracked cello opens the disc nicely and sets the mood for all that follows. Chas Smith is a composer and an instrument maker; his contribution here is a haunting five minute lapse into some dark and foreboding sounds of mysterious origins. “Prelude to Alone” is Michael Jon Fink’s ode to solitude featuring a trio of clarinet, trombones, and his own electric guitar. Rick Cox offers “Later,” a beautiful chamber trio piece or piano, two clarinets, plus light samples and electronics near the closing moments.

It’s worthy to note that on a number of these pieces, the composer doesn’t actually perform personally. Such is the case with John Luther Adams’ “Sky with Four Suns,” where a string quartet breathes life into this beautiful and haunting post-minimalist conceptual piece. Phillip Schroeder’s piece “Another Shore,” for celestra and delays finds beautiful bell-like sounds arranged in varied looping patterns that flow and ebb throughout its four-minute duration. James Tenney’s composition “Mallets in the Air” for Partch diamond marimba in just intonation is realized by a quintet that includes two violins, viola, and cello, and is one of the most interesting pieces here; and continuing the just-intonation, it’s followed by Larry Polansky’s “Eskimo Lullaby,” performed on National steel guitar, one of the only pieces here that features vocals. Closing the disc is Jim Fox’s appropriately titled “Colorless Sky Became Fog,” a surreal piece featuring hammered dulcimer, piano and strings. And that only summarizes about half of what’s here. Cold Blue is one of those labels that truly has its own recognizable sound, and this compilation is a compendious introduction that I can wholeheartedly recommend.