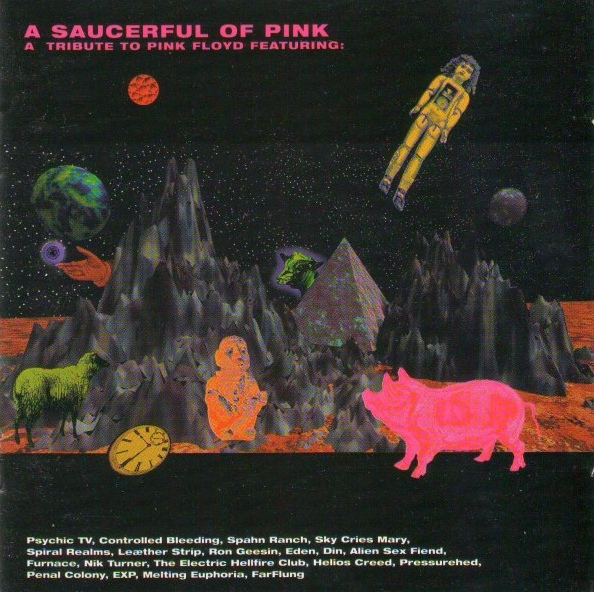 With all of these recent tribute releases, there seem to be three types of covers: those which stay true to the original (or at least attempt to), those who take the original concept and try to improve it while remaining true to the spirit, and lastly, the innovators, taking the old song into completely new directions. What makes A Saucerful of Pink special is that it contains mostly the latter, and while not everything on the album is totally successful, one has to at least recognize that it represents an attempt to innovate.

The album begins with Psychic TV's rendition of "Set the Controls for the Heart of the Sun," adding power and intensity while remaining true to the original spirit. Also along these lines is Furnace's dark and mysterious delivery of "Hey You." Moving well beyond the basic ideas, we have tracks like "One of These Days" and "Interstellar Overdrive" by Spahn Ranch and Spiral Realms respectively, that inject a heavy electronic character into the originals, drastically and successfully altering their trajectories. Even more out of character is Leather Strip's demonic rendition of "Learning to Fly" and Alien Sex Fiend's mutant techno version of "Echoes." Nik Turner does a fine job with "Careful with That Axe, Eugene," the opening part being faithful to the original, while the anticipated climax hits with a squealing sax and throws the remainder of the song into choppy electronic turbulence. Eden's take on Syd Barrett's "Jugband Blues" brings it up to date and adds the power that seemed to be missing in the original, while EXP's "Saucerful of Secrets" is a more faithful take on the original, replete with Nick Mason styled drumming.

Exploding abruptly in a techno-trance firestorm, Penal Colony's cover of "Young Lust" is, if nothing else, interesting. Yet it, and several other tracks here (Controlled Bleeding's "Another Brick in the Wall," Pressurehed's "Let There Be More Light," and Melting Euphoria's "Point Me at the Sky") sound like they were thrown together without much respect to the essence of the original, and in the case of the latter two, the playing is quite sloppy, and the vocals range from uninspired (Pressurehed) to downright horrible (Melting Euphoria). Other artists include Sky Cries Mary, Farflung, Electric Hellfire Club, Din, Ron Geesin and Helios Creed.

So, like all tributes, and all compilations in general, featuring bands with varying artistic visions, there's some good and some bad, and plenty that are hovering somewhere in the middle. Most of the artists here tend to pull the songs in a more techno or neo-psych oriented direction, and overall I'd have to say the better material outweighs the marginal stuff, though it might help to have a programmable changer anyway.