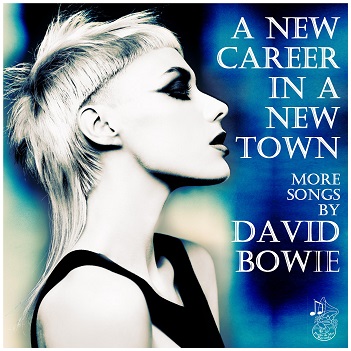 For the Fruits de Mer Member’s Club annual freebie last year, Keith Jones produced an exclusive CD of David Bowie covers titled Fashion: Songs Written by David Bowie. Because of the fun the bands had in putting that disc together, Keith immediately put plans in place for a repeated dose of Bowie for the end of 2016. These two releases were either nearly complete or well into the planning phase when the Thin White Duke passed away on January 10, 2016. A New Career in a New Town features many of the same artists on Fashion (The Past Tense, The Nomen, Cary Grace, Jack Ellister, Rob Gould, The Seventh Ring of Saturn, and Consterdine), some familiar FdM names (Anton Barbeau, The Blue Giant Zeta Puppies, and Jay Tausig), and some new FdM names (Joseph Cave, Clay Cambeck, The Spookers, Steve Barnes, and Mark and the Clouds). When someone decides to cover an artist they will either attempt to emulate the artist, walk through the song, or make it their own. There is a bit of all three on this collection of 16 songs from Bowie’s very early days, Ziggy Stardust, Low, Heroes, Hunky Dory, Diamond Dogs, Young Americans, and Aladdin Sane. The covers that do not work for me are The Nomen’s version of “V-2 Schneider” and their mispronunciation of Schneider, the spoken lyrics on “Heroes” by the Blue Giant Zeta Puppies, Joseph Cave’s lightweight version of “Rock’N’Roll Suicide,” and the stripped down live recording jam session of “Rebel Rebel” by Jack Ellister and Friends at this past summer’s 14th Dream Festival. The covers that really impressed me are Cary Grace’s punk queen attitude on “Queen Bitch,” Clay Cambeck’s fun cover of Bowie’s soul funk disco classic “Fame,” the mellowed out “Star” covered by The Seventh Ring of Saturn, Mark and The Clouds' fantastic Bowie emulaition on “Lady Stardust,” Jay Tausig’s mournful cover of “Bewlay Brothers,” Consterdine’s modernization of the instrumental “Warszawa,” Rob Gould’s sinister rendition of “We Are the Dead,” the Spooker’s unrecognizable ambient version of “V-2 Schneider,” and The Past Tense’s pop-psych cover of an extremely early Bowie song “The Laughing Gnome.” And I don’t really know what to make of the closing track “Jean Genie” by Steve Barnes. He definitely has taken a Bowie song and turned it on its head. Steve’s cover is an unaccompanied spoken blues gospel call and response recitation like “John the Revelator.” Please note this CD will not be commercially available. It is FdM’s annual freebie gift to loyal club members who purchase the FdM releases throughout the year. If you are interested, joining the club is simple and free, just email Keith Jones at fruitsdemer7@hotmail.com