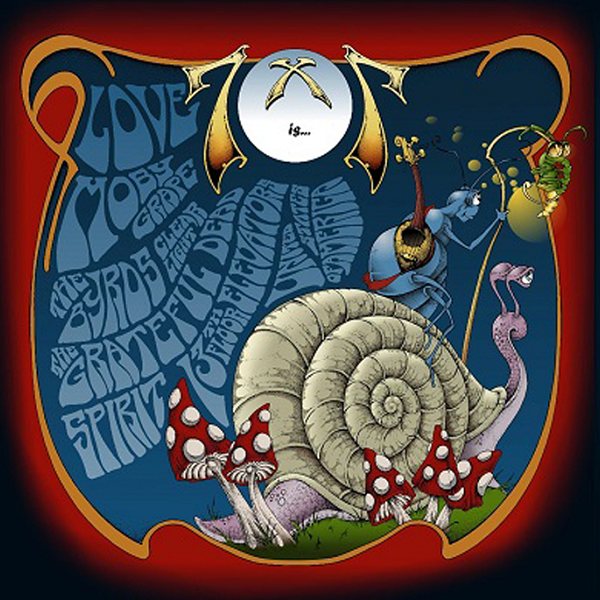 In the late 60s there was a lot of experimenting (drugs and music) happening on the West Coast (Los Angeles and San Francisco), as well as a little place on the third coast called Texas. Many of these bands released only a single album, while others several. Some of these bands like the Grateful Dead, Jefferson Airplane, and The Doors had very successful careers. Up until now FdM has been pretty much focused on covering European psychedelic gems. But with this new box set of seven 7-inch discs, they pay homage to US psych. Keith Jones enlisted some familiar FdM artists, as well as one or two new bands, for this project: The Bevis Frond, The Higher State, The Chemistry Set, Sendelica, King Penguin, The Gathering Grey, Black Tempest, and The Seventh Ring of Saturn. Each band was given the freedom to choose one or two favorite songs from this era to cover. And the result is 14 covers of some obscure and some familiar songs.

The Bevis Frond chose to cover Clear Light’s “Night Sounds” and “Sand” from their only LP released in 1969. The original versions were sparse arrangements and Nick Saloman has breathed new life into them by creating a richer sound while still trying to be faithful to the originals. The Higher State elected to cover two 13th Floor Elevator songs “Wait for My Love” and “You Don’t Know.” These are truly great covers. My only gripe is the missing 13th Floor Elevators’ signature sound of Tommy Hall’s bubbling electric jug. When The Black Angels performed with Roky Ericson a couple of years ago, they played the electric jug, and The Higher State should have incorporated it as well. The Chemistry Set covered one of my favorite 60s bands, Love and two songs “A House Is Not a Motel” and “Live and Let Live.” These are outstanding covers and reinterpretations with some inspired playing and arrangements. Sendelica chose experimental psych band the United States of America and two songs from their only album, “Hard Coming Love” and “Love Song for the Demon Ché.” The first is a rocking jam and the second a quiet ballad. Then King Penguin provides two covers of The Byrds. The first is a Gene Clark song “She Don’t Care About Time” and the other is the classic “5D (Fifth Dimension).” King Penguin was able to capture Roger McGuinn’s jangling guitar work on the first, plus they added a bunch of strings and harpsichord. “5D” is pure raga rock with sitar, very different from the original and almost twice as long. The Gathering Grey chose Moby Grape, a band that always intrigued me but never enough for me to check out. The two cover songs are “I Am Not Willing” and “Sitting by the Window.” The first is an atmospheric treatment and would appeal to David Lynch. The second is a slow psych ballad and reminds me of another great band from the 60s, The Collectors. Black Tempest only chose one song, which is an oddball here as it is Spirit’s “Nature’s Way” from 1971 while all the other songs are from the previous decade. This is another great cover, with more fuzzed guitar and sheer energy than Spirit and almost a whole minute longer. The last song is by The Seventh Ring of Saturn. And what compilation of US psych covers would be complete without the Grateful Dead? They elected to cover “Cream Puff War” from the Dead’s 1967 debut album. The original song has more a 13th Floor Elevator vibe than the fuzzed and phased guitars on this cover. But the song works great nonetheless. And the vocalist also sounds quite like Jerry Garcia. What else can I say, but look for this fantastic boxed set when it is released on September 22, 2014!