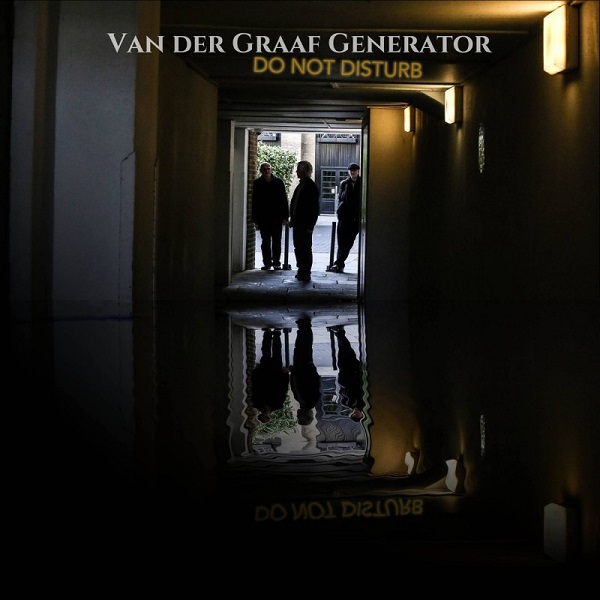 Do Not Disturb is the 13th studio album by the legendary Van der Graaf Generator, and the third studio album since they reinvented themselves as a trio ten years ago (Peter Hammill, Hugh Banton, and Guy Evans). VdGG was originally formed in 1967 in Manchester by Peter Hammill, and given the ages of the band members, you could reasonably expect a mature and sedate set of music. Nothing could be further from the truth. VdGG continues to push the limits, producing creative and crazy progressive rock music that belies their age. Rather than enter the studio and hit the record button, VdGG meticulously rehearsed each piece to get it right. Some of the passages consist of prepared sonic passages as well as live tracks, with overdubs happening in their individual studios. There is a bluesy / avant jazzy vibe to many of the tracks, with some tracks tending towards minimalism. “Alfa Berlina” is an avant rock masterpiece, with street sounds, reversed music, other odd sounds, odd timing, and vocals with no accompaniment. At times there isn’t even a melody. “Forever Falling” begins with a country rock vibe and melodic vocals that morphs into dissonance with the track unravelling, coming back together, and unravelling again. The only instrumental on the disc is “Shikata Ga Nai,” a dissonant avant jazz piece. “(Oh No I Must Have Said) Yes” has a surprisiing Zappa-esque feel. And the quiet closing track “Go” could possibly be a swan song with its slow, floating chords and the final lyric, “It’s time to let go,” as the music drifts off into silence. Do Not Disturb meets or exceeds their previous releases and is sure to please any VdGG fan.

When it comes to the pantheon of progressive rock pioneers, Yes, Genesis, King Crimson, and Gentle Giant get the lion’s share of attention. And while their influence on future generations of musicians is obvious, we shouldn’t forget that there were many other bands of that generation who were just as innovative, if not as popular. Van der Graaf Generator has always seemed like an outlier among their contemporaries, not fitting into any stylistic boxes, plying their own course with little regard to anything outside the world their music created. Maybe that’s because, more than any of the other bands, Van der Graaf has always been the vehicle for Peter Hammill’s vision (or one of the vehicles, as we can’t discount his prolific solo work). Even more than Robert Fripp’s dominance of King Crimson, Hammill is responsible for the sound of the band he leads — not to discount the contributions of Guy Evans (drums) and Hugh Banton (keyboards), who have been with the band from the first album in 1969. Evans has been on board for the whole journey, and Banton for all but a spell in the late 70s. The band’s defining characteristics have always been Hammill’s intense vocals and gritty lyrics, Evans’ unconventional drumming, non-standard instrumentation (sometimes guitarless, usually including woodwinds, violin, or both), and a way of arranging music that rarely adheres to standards of structure and form, following instead the path of the lyrics. Now, 47 years on from their debut, the core trio has released Do Not Disturb, and the absence of the added instrumentation provides only a minor distraction, since all of the other elements are in place and firing on all cylinders. Playing it safe has never been a Van der Graaf goal, and mellowing with age is not on the agenda. The beginning of “Aloft” lulls the listener into a false sense of comfort, with sparse, clean guitar chords and Hammill’s voice in breathy mode, but the music builds over the course of the first four minutes until a heavy riff comes in to remind us that these guys can still rock, albeit in their own way. Even “Forever Falling,” the most conventional song on the album, diverts from expectations: after two verses and a chorus (keeping in mind that the terms “verse” and “chorus” are used loosely here), it ventures into a middle section in a different tempo, then after returning to the verse riff, throws in a completely new section before restating the verse and chorus to finish off. Throughout the nine tracks, moments of heavy, jagged riffing on guitar and organ are balanced with atmospheric sections featuring field recordings, backwards vocal choirs, accordion, and sound effects. There are maybe more of these sparse sections than on previous VdGG albums, but that doesn’t reflect any real backing away from intensity. Do Not Disturb is full of surprises, providing a welcome example of artists maintaining their creative edge well beyond the lifespan of most groups. It’s also one of the highlights of 2016.