Udo Pannekeet — Electric Regions
(Bandcamp In and Out of Focus no#, 2019, DL) 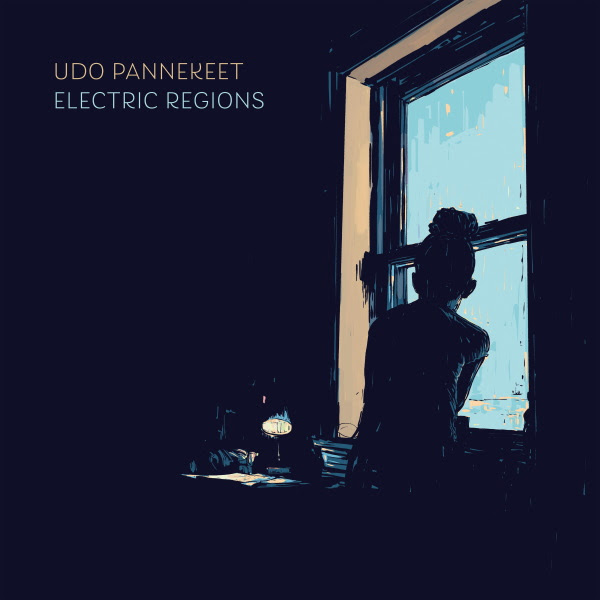 When it comes to electric bass in jazz, it’s natural that anyone will be compared to Jaco Pastorius. With Udo Pannekeet, the comparison is especially apt, but not in the expected way: Pannekeet’s playing doesn’t always sound very Jacobian, but Electric Regions is an album with many similarities to Jaco’s 1981 classic, Word of Mouth. Like that album, Electric Regions is the bassist’s second album as leader, and also features extensive arrangements for large ensembles ranging well beyond mainstream jazz fare. Pannekeet is best known for his work with Focus, a band he’s been touring and recording with since around 2016, though Electric Regions bears little resemblance to that band’s music. Two of his Focus bandmates, guitarists Menno Gootjes and Eef Albers, contribute, along with a dozen other players, for what is nearly a big-band ensemble at times. Drummer Marcel Serierse, who has played with the NDR Big Band, is on board except for a few places where Pannekeet programs the rhythms; most of the keyboards are played by Rein Godefroy, again with Pannekeet filling in. There’s also René Ten Cate on vibraphone, Jos de Haas on percussion, a complement of brass and woodwind players, and a total of five different guitarists (including the two already mentioned). The album starts out with “Electric Regions Part One,” a multi-part piece nearly 24 minutes in length. It’s a masterful journey that blends classic electric jazz sounds with energetic percussion, electronics, funk, freeform sections of indistinct vocal samples, classy horn arrangements, tight unison parts, and a number of excellent solos from trombone, trumpet, guitar (probably two different players), and synth — interestingly, although Pannekeet’s bass has (or doubles) the lead melody at times, he doesn’t take a solo. The rest of the album comprises four shorter tracks with a nice variety of styles, from energetic Weather Report tinged funk (“Integration Yes”) to a melodic bass ballad (“Little Nura”) to driving techno-jazz (“The Antibes Situation”) to slinky fretless grooving (“Cocon Cocon”). In short, if you wish Weather Report had taken a different turn after Black Market, away from pop and back into jazz, and added a full horn section and prominent guitar, Electric Regions is exactly what you need to hear.