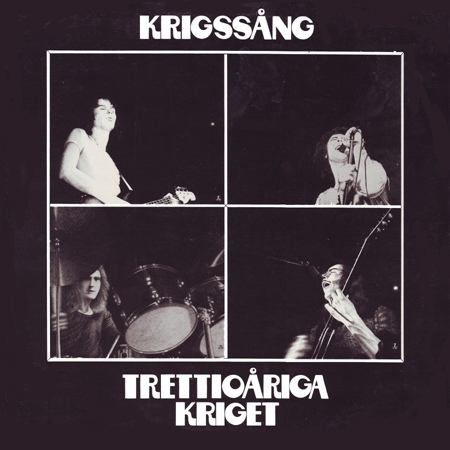 With their second album, a year after their outstanding debut, Trettioåriga Kriget put out another classic in Krigssång. Musically, it picks up right where the previous record left off, with inventive guitar playing, prominent bass parts, and strong vocals. The personnel is consistent from before, though Robert Zima is credited solely with vocals, leaving all the guitar work to Christer Åkerberg, with most tracks featuring multiple parts, both electric and acoustic. Stefan Fredin’s bass is often the star of the show, with a great solo on “Murar,” where he sounds like Chris Squire gone off the deep end with a wah-wah pedal. Dag Lunquist’s creative drumming holds things together. Several tracks feature keyboards (Mellotron most notably) in a support role, though the musician is uncredited. The title track is split into two parts, leading off the album with a normal-length song and finishing it with a side-long second part. And while the epic track is the highlight of the album, it would be unfair to dismiss the shorter tracks — they’re all great, with “Jag och Jag och ‘Jag’” being a particularly nice one, with acoustic guitar and lovely vocal harmonies. Later CD reissues of the album feature bonus tracks, including versions of two tracks that would appear on their next studio album: “En Kväll Hos X,” in a live version, and a piece “Dagspress-76,” featuring some outstanding drumming, which no doubt led to the title, that became “Dagspress.” “Moln,” another energetic tune that reminds me a bit of Mirage-era Camel, has not to my knowledge appeared elsewhere. Two of the bonus tracks feature keyboards and sax from Mats Lindberg, who would become a full member of the band by the next album, and has been with them ever since. Listeners unfamiliar with this band should start with this album or the self-titled debut, though in truth they’ve never put out a bad album. They have a style all their own, which has elements in common with early Yes, Captain Beyond, and (as mentioned) a certain era of Camel, but is never derivative or dull.

Ring of Myth - Unbound – First impressions are generally correct. This could be a likable excursion down a well trod path, however, I found it pretty much impossible to listen to this CD all the way through. This LA band is a...  (1996) » Read more