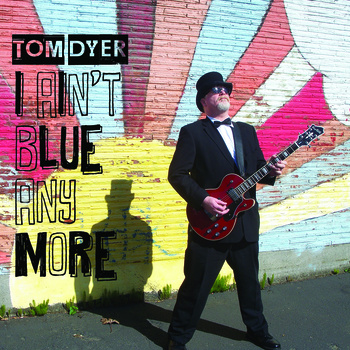 On I Ain't Blue Anymore, Tom Dyer functions as a one-man Captain Beefheart plus Magic Band. His herky-jerky take on rootsy Americana encompasses folk, blues, and rock into a bubbling pot of guitars (acoustic and electric), banjos, ukulele, synthesizer, bass, drums, and whatnot, with his gruff voice bringing it together with lyrics that are by turn amusing, keenly observational, and obliquely political (or social commentary). He even throws in covers of Beefheart's "Smithsonian Institute Blues (or The Big Dig)," The Sonics' "The Witch," and a version of the traditional "John the Revelator" by way of Son House, so you know where he's coming from. His updated version of "Call on Me," originally done with his former band The Colorplates, provides a jangly alternative to the original punkish version. The drum parts are mostly pretty minimal, but there's enough going on with the other instruments that it works just fine. On the instrumental "I'm Fretless," a gritty, distorted slide guitar sends us to a smoky electric swamp; the other instrumental features oddly compelling strumming on ukulele that is slighly discordant. Towards the end of the CD, "Lizzy" ramps things up a bit, with an organ part added in, and a mass of backing vocals to remind you that Dyer really knows what he's doing in the studio. I Ain't Blue Anymore is an eccentric Seattle take on "New Weird America" — though I suppose in this context, "eccentric" is redundant. No matter, it's good music, well worth listening to.