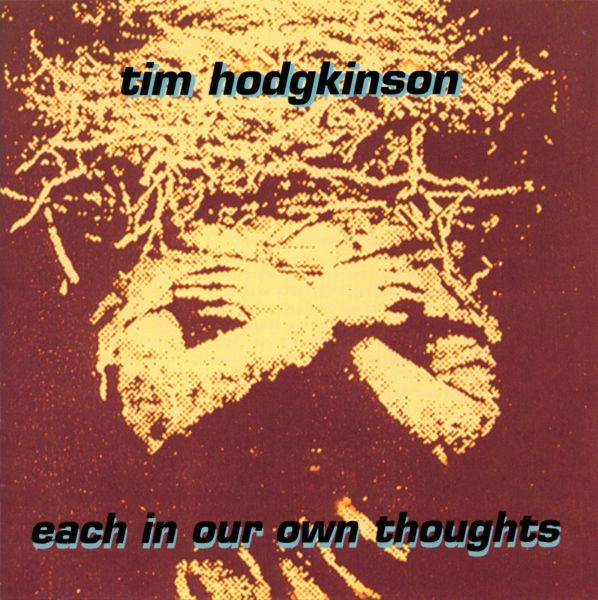 Tim Hodgkinson, the keyboardist/sax-meister responsible for some of the most angular, complex, and free-structured music of the seventies (Henry Cow) and the eighties (The Work), has returned with a remarkable solo release that provides a high-water mark for RIO alumni. Each in Our Own Thoughts contains a startlingly varied number of styles, yet is cohesive in itself. Two four minute tracks, "A Hollow Miracle" and "Palimpsest," featuring fellow Cow-graduate Dagmar Krause provide a surprisingly inventive use of sampling and MIDI sequencing. While the percussion does not change nearly enough through each piece, the beats and timings are odd enough to keep one interested. Overlaid are horns, piano and keys running in counterpoint as Krause intones a text written by Chris Cutler (the drummer of Henry Cow, Art Bears, The (EC) Nudes, and many others). "String Quartet 1" is the first recorded of the four such pieces that Hodgkinson has recently penned. While it may seem that a classical piece would not feel at home coming from an individual known most for avant and free jazz and improv as well as quirky, experimental punk-influenced rock, this piece showcases Hodgkinson's ability to compose angular, dissonant chamber music. An excellent work, it stands out as much more than just for diversity's sake. A companion piece, "Numinous Pools for Mental Orchestra" was written for orchestra but recorded entirely by MIDI. Interestingly enough, the main force of the music is not compromised. While the dynamics are smoothed out and potentially harsh moments are calmer, the structure and form remain uncompromised. Perhaps a bit on the minimalist side, "From Descartes' Dreams" is largely focused on piano, clarinet, bass clarinet, and alto sax (all played by Hodgkinson), with simple (but not cheesy) MIDI-ed percussion. This is a moody and nightmarish piece that, to this reviewer, evokes visions of far-future, technologically dystopian cityscapes. "Hold to the Zero Burn, Imagine" is the track that will make this disc a must for all Henry Cow fans. It is a 16 minute piece that was written by that band in 1976, but never recorded in the studio. Featuring even more former Cow members — Chris Cutler and Lindsay Cooper — the focus for the first 10 minutes is on Krause's vocal storytelling; afterward the piece is mostly instrumental. The music is less dense than Legend era Cow, more in the vein of Western Culture or In Praise of Learning. With Cutler putting forth a remarkable effort on drums, it sounds as though the track could have been recorded by the original Cow, but the distinctive absence of Fred Frith is the missing piece. I find this Each in Our Own Thoughts an important and invigorating release. Not only does Hodgkinson prove that a musician that's been around the block a few times can release uncompromising music, he does so while showing that modern digital technology, when used as a tool rather than as a crutch, is a valid resource to the adventurous composer. Overall, this CD is a must for the Henry Cow fan, as well as the lover of avant-garde, post-classical or structurally complex music. The only thing missing is the synergy of group composition. Highest recommendation.