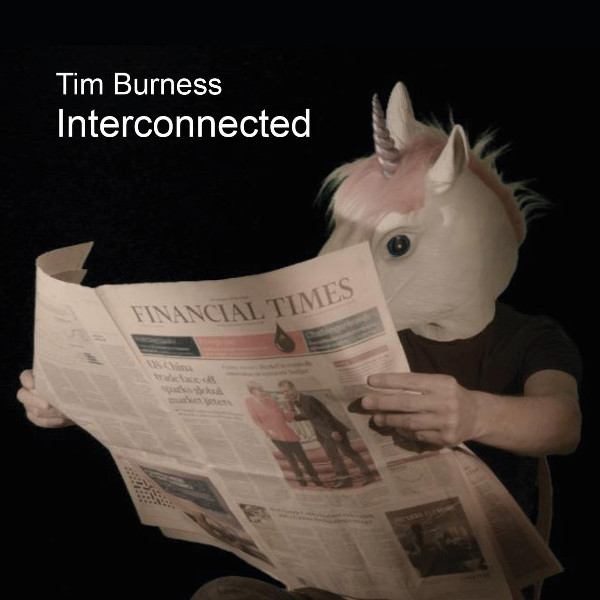 This past November UK musician Tim Burness released his latest album, Interconnected. Like his previous album, this one features a wide range of musical styles, touching on electro-pop, moody progressive rock, experimental, and cinematic music. Very dark in places and more playful in others, the album is based on the idea of the interconnectedness of things. Tim (guitars, keyboards, percussion, and vocals) recorded the music over the last two years using musicians who had performed on his previous albums: Fudge Smith (drums), Keith Hastings (bass and classical guitar), and Monty Oxymoron (keyboards). The album is a mixed bag of music with Tim sounding like Kraftwerk or Gary Numan on “Electric Energy” and “I Am Afraid (Saturn Conjunct Pluto),” progressive rock on “Freedom” and “Beautiful World,” catchy pop songs “Dear Stranger,” “Making It Up,” “Still Mumbling,” and “One More Time,” and dark electronic experimental music “This Is the Space” that touches upon Bernard Szjaner, “A Shorter Space,” and “Ants” that begins as an outré experiment and morphs to dark prog and evokes images of ants. The best song on the album is the cinematic “Beautiful World,” which also happens to be an environmental protest song. Overall an impressive album with more than enough different styles to keep you fully engaged for its 42 minutes.

Djam Karet - The Heavy Soul Sessions – Over the last four or five years, Djam Karet has gone through some evolutionary changes. Gayle Ellett has switched from guitars to primarily analog keyboards, and a fifth member Mike Murray has been...  (2011) » Read more