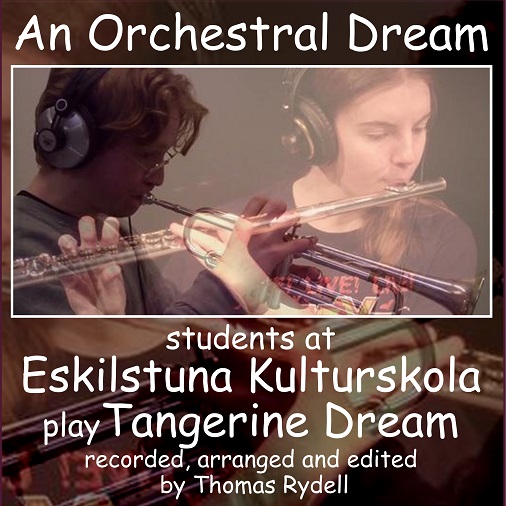 Swedish composer, electronic musician, and music teacher Thomas Rydell is no stranger to Exposé.  In 2012 he collaborated with Uwe Cremer (AKA Level ∏) on Sirius Singularity and then again in 2016 on Time Trilogy. To  pay the bills, Thomas works as a guitar teacher at Eskilstuna Kulturskola in Sweden where he has over the years created music videos of his students playing anything from classical music to pop and rock, recording video covers of such diverse bands as Gentle Giant, Yes, Genesis, and the Alan Parsons Project. With Thomas’ love of Krautrock he wanted to record some of his old favorite tunes, which are not your typical musical repertoire in high schools. So he scored three of Tangerine Dream’s well-known instrumentals from 1984 for acoustic instruments. The students, of course, are not professionals and one of the criterion for the selections is that the music should be playable by acoustic instruments and have enough pauses to allow the woodwind and brass players sufficient time to breathe, with the lesser criterion that the tempo and key are not too difficult to play. Between 2017 and 2020 Thomas and his students recorded their covers of “Poland” from Tangerine Dream’s Warsaw  Concert, “Charly the Kid” from the Firestarter soundtrack, and “Love on a Real Train” from the movie of same name, and Thomas posted them on YouTube. Now, in its never ending quest to discover the unexpected and the unfathomable, Keith Jones of Fruits de Mer Records found Eskilstuna Kulturskola on YouTube and decided to release these three tracks on a 10” lathe cut. As is typical with FdM’s special lathe cut releases, it was rapidly and seriously oversubscribed, so the only way to experience the music now is to watch on YouTube. All that I can say about this release and these high school students is WOW! They breathe new life and energy into these Tangerine Dream compositions. I never would have thought there was this much depth in Tangerine Dream’s music from this era. I lost interest in them when they started scoring Hollywood soundtracks. If you were not one of the “chosen” who were able to score a lathe cut, definitely check out Eskilstuna Kulturskola’s YouTube channel (linked below). You will be impressed!