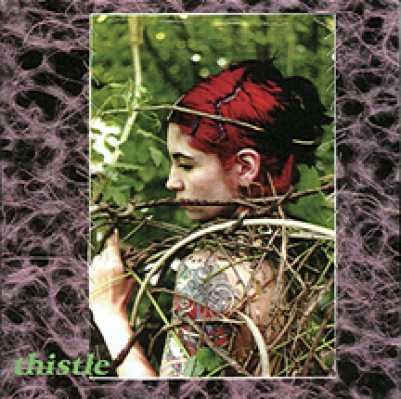 What a pleasant surprise I had the day when I found this treasure in my mail box! Thistle is the latest release of mysterious-cosmic-eerie female vocal-electronic music from Ventricle. Up until now this small private label has only released Dusty Lee’s projects of Mauve Sideshow and Torn Curtain. Ventricle is growing and Thistle represents the first non-Dusty release. Like Mauve Sideshow and Torn Curtain, Thistle is a duo (Kelly on instruments and effects and Danielle on vocals). There the similarity stops. Rather than the trippy recitatives and Mellotron of the other two bands, Thistle explores the analog electronic realms of deep space. Their debut CD seems like one long composition, the nine songs flowing seamlessly from "Circle Star" to "Remember." Kelly paints his musical canvas with exquisite drones and electronic watercolor washes highlighted by Danielle’s heavily processed and mystical “little girl” voice. This is great music and at nearly 44 minutes, it is just too short! Another departure for Ventricle with this release is the accompanying artwork. The album cover contains a Photoshop altered photo of a young woman (Danielle?) with a tattooed shoulder and swathed in branches. The photo is framed by an organic wispy material that gives it an appearance similar to a Nettwerk release. The booklet contains other photos of her as well as one enigmatic portrait of Kelly (?) staring at you with half of his face covered by hair and the other half by a tiny gold chain spider web attached at his eyebrows, nostrils, and lips. Strange and gothic images to accompany the music. Thistle and the other Ventricle artists are in a class of their own. Space music and experimental music officiandos will enjoy Thistle.