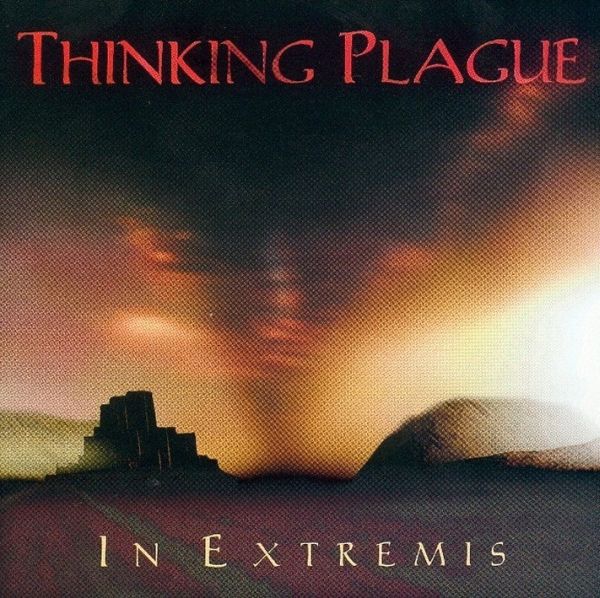 Thinking Plague is yet another stunning product of the prolific revolving cast of characters that have brought us the 5uu's, U Totem, and other projects. This particular configuration is led by amazing guitarist / composer Mike Johnson, supported by such stellar talents as David Kerman (drums, gibberish), Bob Drake (bass, violin, vocals), Deborah Perry (lead vocals), and other familiar names. This new album, In Extremis, was a long time coming, and boy, was it worth the wait. I can safely say that this album wins my #1 slot for best new releases of 1998, and may very well occupy the same slot for the entire decade. Yes, it is that good. A perfect “10.”

Johnson has created an emotionally charged maelstrom of progressive rock sounds, the statistical density of which is still hard to fathom. I mean, no two measures of music on this album are alike, yet the album has a very logical, linear flow and is surprisingly easy to listen to if you're ready for it. Johnson's guitar is the star of the show, incorporating the styles of Fred Frith and Robert Fripp, along with the brief speedy outbursts of Steve Howe circa Topographic Oceans and Relayer. The voices (mostly by Perry, but Drake sings as well), in true RIO fashion, dance around the complex rhythms of the music, convening again with the musical flow at just the right moments. Kerman's drumming, as always, is phenomenal; he must be one of the greatest drummers alive today. The lyrics (all songs are vocal pieces except one) are very intelligent and philosophical, and make damn good reading on their own.

All of the songs are uniformly fantastic, and there is not a single weak moment on the seven tracks and 60 minutes of this disc. The biggest treat of all is the 14-minute instrumental “Les Etudes d'Organism,” which goes through mind-boggling changes in tempo and mood, injects a fair dose of humor, displays aggressive ensemble playing and killer chops, and just basically delivers everything I would ever hope to hear in a progressive rock instrumental. The other long track, the 13-minute “Kingdom Come,” is the darkest, with lots of sustained tones and a less frantic pace than the rest of the disc. The remaining tracks are in the 4-8 minute range, and they are all over the place, never staying in one place for too long. This is for serious listening only. Truly a jaw-dropping album, and the best album I have heard in a very long time.

It's been way too long since we've heard a CD from this group, although, fortunately, we get them in bits and pieces from other groups in the 5uu's circle. In This Life was one of the 80's most esteemed “RIO” albums, a step on from the Art Bears, music of passion and adventure. I'm happy to say that Thinking Plague are back and as compelling as always, integrating the musical experiences of the members over the last 9 years into a music that is as good as you'd expect from this line-up. As the 5uu's moved into a more progressive rock direction without losing any sense of originality, so does Thinking Plague here. The music is harder-driving than any of their 80s albums, David Kerman's drumming is continuing to gain in power and intensity, and the music benefits. Vocals from both Deborah Harris and Bob Drake, typically modal and nonconformist, imbue a sense of strangeness that only Thinking Plague can. A surrealistic atmosphere is prevalent, such as in “This Weird Wind” with Drake's vocals, often treated, and Mike Johnson's incisive guitar backed up by an almost Art Zoyd like sound. “Les Etudes d'Organism” at 14 minutes is one of the two main compositions, a pastiche of both serious and humorous parts. The shortest track, “Maelstrom,” is much like old Thinking Plague, with strange guitar and plaintive vocals by Harris, and a strange mix of heavy rock, orchestration, and RIO. The album's finale also nears 14 minutes, “Kingdom Come” being an apocalyptic epilog, a piece of dynamic complexity. An outstanding release and one of the best this year.

Nine years since their last album, Thinking Plague is back with a vengeance. Their music is angular, drives hard and is laden with a complex and brilliant precision, one that combines the accessibility of the best progressive rock with the creative spark of Frank Zappa — and in the end sounds like neither. Guitarist and primary composer Mike Johnson is still the main mover, and many of the same folks remain in the lineup from a decade ago: Shane Hotle (keys), Mark Harris (winds), Bob Drake (bass, vocals, violin) — the latter also a member of 5uu's. In fact if this occasionally reminds the listener of 5uu's, it should be no surprise since two-thirds of that band (Drake and drummer Dave Kerman) are regular members of Thinking Plague, and 5uu's keyboardist Sanjay Kumar appears on one track as well. The most notable change in the lineup is the replacement of former vocalist Suzanne Lewis (who went on to Hail and who knows where else) with newcomer Deborah Perry — a very good switch from this writer’s perspective, as Perry seems to mesh far better with the angular shape of the music. Seven tracks of varying length, from the fourteen minute multi-part opus “Les Etudes d’Organism” down to several shorter numbers in the four minute range, each meticulously composed, arranged and performed. This is one of those discs that offers new surprises with every listen. My highest recommendation.

In this album, where one can find all the ingredients of the American new rock and free jazz scenes, we also discover the musical embodiment of an exceptional label, Cuneiform. This large line-up (bass, flute, percussion, synth, guitars, samples, violin, piano, sax, voice, drums...) leaves plenty of room for improvisation, but within a very strict, intricate and complex rhythmic basis. Some acoustic impromptus alternate with some very dark and more progressive instrumental parts, while the almost schizophrenic voice of Deborah Perry rises over the sonic crowd. Recorded with top-notch musicians from the Rock In Opposition scene, this music is an intellectual declaration of independence as well as total renewal of musical styles. Borrowing from progressive and crimsonic influences, Thinking Plague's music has a beautiful and disturbing capacity to constantly invent new musical paths as the music enfolds. The rhythmic force behind it all is Dave Kerman (U Totem, 5uu's, Present, etc.), and he provides a moving ground to the free solos of Mark Harris and enables the intrusion of the distorted and intimately funny folkloric music of Bob Drake. I guess that one can really figure what 'In Opposition' means when listening to this really mind-blowing album. Maybe this would be a good title for the next album?