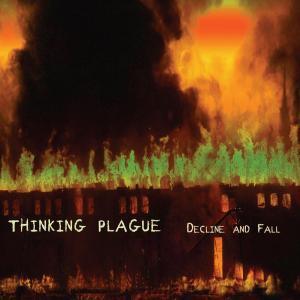 A new Thinking Plague album is always cause for celebration, especially when eight years elapse between them. But given the defiantly un-commercial and brutally difficult nature of the music it’s no surprise that their germination phase can be a long one. It surprised me that this is the first TP album to delve into the dysfunction and turmoil of our modern age. I always assumed this was the conceptual narrative behind every album, though the turbulent and frighteningly unsettling nature of the band’s entire catalog probably has something to do with it. The good news here is that guitarist/composer Mike Johnson and crew haven’t lost the script, despite some lineup changes since 2003’s History of Madness. Most notable is new singer Elaine Di Falco (formerly of Hughscore, and bassist Dave Willey’s partner). She might lack Deborah Perry’s winsome appeal, but I give her high marks for even hitting the notes in what have to be some of the trickiest vocal arrangements ever conceived. Another newcomer is drummer / keyboard player Kimara Sajn (since replaced by Robin Chestnut), who — along with Willey — lays down the group’s trademark muscular yet dynamic rhythmic framework, as well as performing piano, Mellotron, and synths throughout — quite an impressive contribution. Rounding out the ensemble is returning reeds player Mark Harris, whose playing imparts a chamber-rock ethos that fits in well with the overall RIO character of the material. How is the album? TP fans won’t be disappointed, and the rest of you need to get with the program.