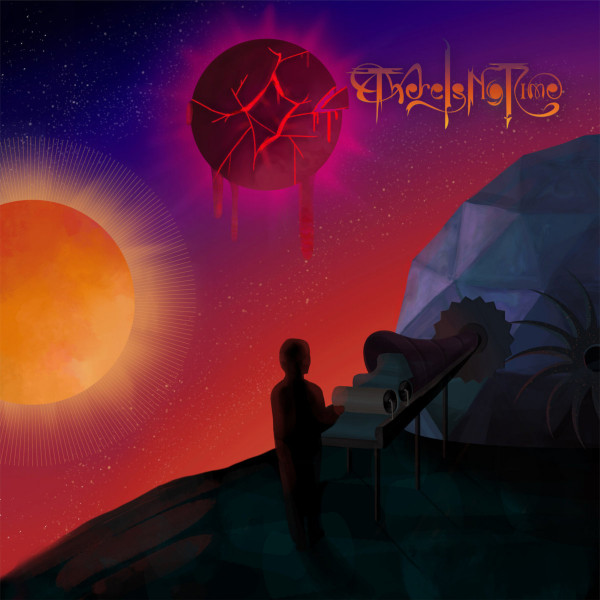 In the annals of troubling band names, There Is No Time stands with certain questionability, though I have heard far worse (Public Foot the Roman, anyone?). It is the project of Chris Boros, composer and producer of the music at hand, singing and playing acoustic and electric guitars, dulcimer, keyboards, Mellotron, and drum programming. Working with Boros is instrumentalist Jerry King on electric guitars and bass guitar, who we know well from Cloud over Jupiter, Moon Men, Manna / Mirage, and many other endeavors. While Boros labels the music on this self-titled debut as progressive space folk-rock, I can’t say that I really hear anything remotely ‘folk’ in the eleven tracks at hand, but progressive and space rock are spot on — heavy distortion and trippy effects, but not so much speed and hyperdrive, although there is a bit of the Hawkwind spirit embedded in the sound, and with that nearly everpresent Mellotron one might be occasionally reminded of Wolf City era Amon Düül II. The two-and-a-half minute “Interlude” is the only cut of the eleven with no lyrics, and probably stands as my favorite piece on the disc. Why is that, you might ask? The vocals are absolutely awful; even double tracked with delay and other effects, the singing just doesn’t cut it at any level. The music alone — without any vocals, would make any track on the album better; replace the singer with a sax or violin some other solo instrument, or better yet, get a better singer next time out, With things as they are, it’s really hard to recommend this.

Related artist(s): Jerry King / Cloud over Jupiter, There Is No Time