The Worm Ouroboros — Of Things That Never Were
(AltrOck Productions Fading FAD011, 2013, CD) 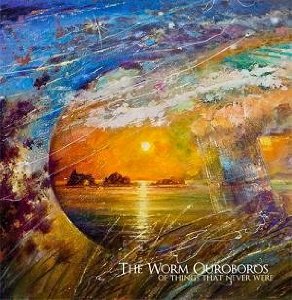 While one might be mystified by the opener “L’Impasse Sainte Beregonne,” a sort of crepuscular instrumental prog dirge highlighted by electric guitar, flute, and bassoon, things take a more light, playful and colorful turn with “Shelieth,” seemingly inspired by classic period PFM, though not derivative in any sense. There must be something in the water in Minsk that produces brilliant musicians with outstanding compositional ideas. The band is nominally a four-piece with multi-instrumentalist Sergey Gvozdyukevich handling most of the writing, as well as the vocals, though guitarist Vladamir Sobolevsky has a strong hand in the arrangements, with bassist Alexey Zapolsky and drummer Eugene Zarkhin providing a solid rhythmic foundation that adds just the right touches to their sound. The wild card is reed player Vitaly Appow, from Rational Diet and more recently Five-Storey Ensemble, who appears on many of the tracks here, adding melodic counterpoint to Gvozdyukevich’s flute and keys. The album’s first vocal cut “The Pear Shaped Man” most definitely plays the Van Der Graaf / Hammill card, an influence that can be heard on some of the other tracks as the album proceeds, but nowhere more so than here. “Soleil Noir” starts by recalling the gentler side of classic period PFM, though this time with vocals, as it slowly morphs into a more edgy rock piece. The album’s darkest cut is “The Curfew,” one that may at different times recall elements of Magma, Present, or Art Zoyd; here electric piano duels with guitar and bassoon, with a funky zeuhl-like bass figure supporting, all topped off with mysterious chanting. “Dawn Angel” is a beautiful acoustic guitar duet that leads nicely into “Pirates in Pingaree,” a powerful, shifting symphonic piece that at times evokes classic Camel and other Canterbury and classic Italian influences. This Worm Ouroboros (not to be confused with a Bay Area post-rock band with the same name) pushes all the right buttons, and Of Things That Never Were is nothing if not a startling debut.

Lana Lane - Garden of the Moon – When one has to crank out fifty or sixty reviews per issue, you pretty much have to be listening to music at every possible opportunity, including hours spent at the so-called day job. Usually it's...  (1999) » Read more