The Supertones — Unknown and Other Hits From Outer Space
(Supertones Music no#, 2019, CD) 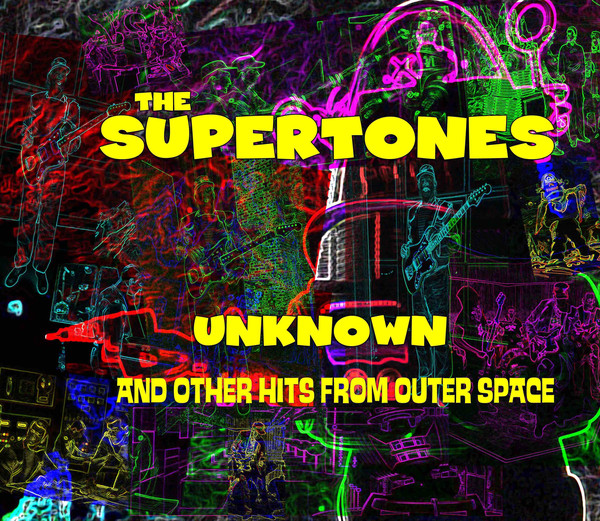 A surf rock band from New York City, who woulda thought? Plus they’ve released about ten albums before this one, starting in the early 90s with their debut The Big Wet Twang, none of which this wrriter has heard; unfortunately, the album at hand Unknown and Other Hits From Outer Space was my introduction to this very authentic-sounding instrumental four-piece, led by lead guitarist Tim Sullivan. The rest of the crew features rhythm guitarist Seth Lipscher, bassist Simon Chardiet, and drummer Tommy Mattioli, the latter two forming the production team, recording at Cowboy Technical Services studio in Brooklyn. Thirteen excellent original numbers in the style of classic Ventures join three instrumental cover tunes for an outstanding set that mirrors the spirit of this genre from the early 60s, and pulls it forward into present relevancy. Outstanding original material like the title track, “Torque Wrench,” “Balazar,” “Down the Rabbit Hole,” “Shanghai Surf,” and “Speed Trap” capture the essence of what surf rock is and has always been, without any lyrics, just the instrumental sound we all dug as kids wherever we were across the world in those heady days of yore. The three cover tunes are of particular interest and certain signposts of familiarity in the set, including a new take on Ennio Morricone’s title track to “For a Few Dollars More,” plus a couple classic tunes from the late, great David Bowie, “Space Oddity” (1969) and “Starman” (1972) punctuate the set, those are definitely the hits from Outer Space. “Queso Grande” (Big Cheese) is an original that sounds at once a bit out of place but also rings with a certain familiarity as well. Nothing here is more than about three or four minutes long, just the way it used to be, true to the genre The Supertones are representing, as they breathe new life into it.

Mastermind - III - Tragic Symphony – Upon first hearing "Tiger! Tiger!" (a neo-prog/hard-rock adaptation of the famous William Blake poem and the first song on the album), I didn't have high hopes for the rest of the album....  (1995) » Read more