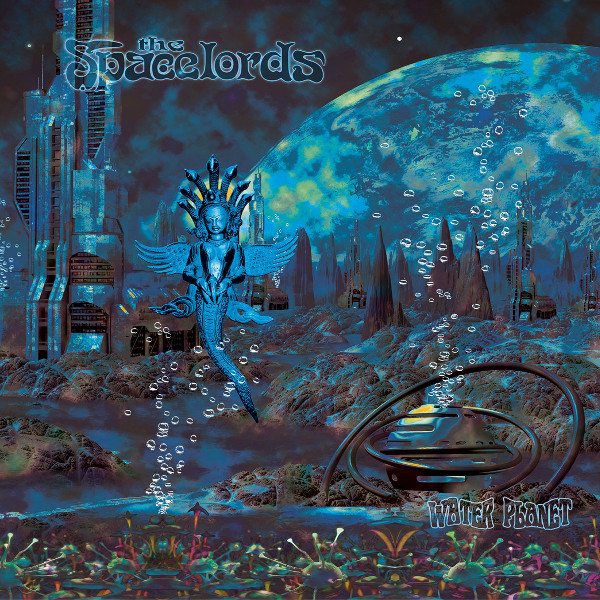 Tell you what — if I got an album by a band called The Spacelords and it wasn’t at least a bit like Hawkwind, I’d be kinda disappointed. Water Planet gives us three long tracks of rocking, grooving, space rock along the lines of Ozric Tentacles or Hidria Spacefolk: hypnotic drums; guitars treated with wah-wah, phaser, and echo; sweeping synthesizers; and touches of non-Western instrumentation. This German band is a trio on their fifth album since 2010, with Mattias “Hazi” Wettstein (guitar, effects) and Marcus Schnitzler (drums, soundscapes) in place since the beginning and Akee Kazmaier (bass, effects) on board for his second outing with the band. Given the amount of repetition involved in this kind of music, it can be a challenge to keep a listener’s interest. The Spacelords manage it by gradual transformation, so they’re never just repeating the riff the same way. The bass part will vary slightly, the drums will put accents on a different beat, a different keyboard sound will come and go, an audio sample from NASA will pop in, and so on. At widely spaced intervals, the riff will actually change. The credits don’t list any other players, so I’m going to assume the multiple guitar parts and synthesizers are accomplished by overdubs, but it doesn’t matter — this is cosmic music that avoids ambient expanses and gets to business. The playing is universally solid and creative, without the kind of guitar showboating that some long-jam bands are prone to. Concise songs with verses and choruses you will not find, but if you want some rocking grooves to send you off planet and through the spaceways, this band has your ticket.