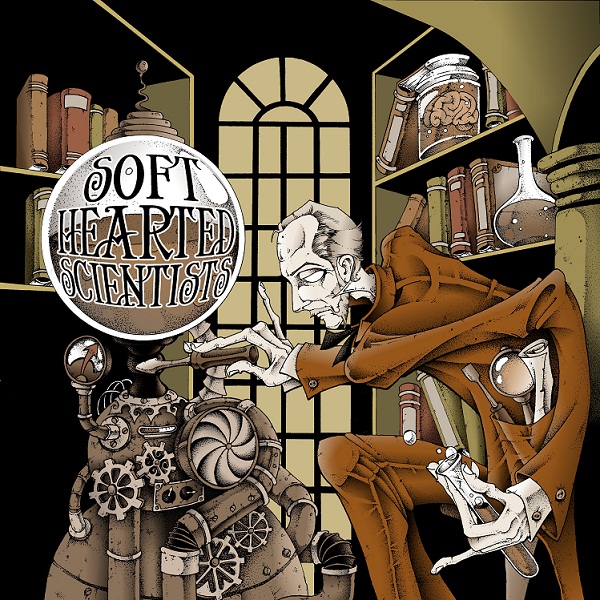 In their never-ending search for new and exciting music, Fruits de Mer has uncovered a hidden gem from Cardiff, Soft Hearted Scientists. This quartet of Nathan Hall (vocals, guitars, organ, harpsichord, piano, etc.), Dylan Line (vocals, guitars, organ, piano, accordion, etc.), Paul Jones (vocals, guitars, banjo, mandolin, etc.), and Michael Bailey (bass guitar and bazouki) create contemporary Brit psych-pop embodying so many varied influences that they have a unique and yet quite familiar sound. Think of British music-hall, Gothic horror, The Beatles, The Nazz, The End, The Hollies, The Kinks, etc. and you may begin to have an idea what it is like to listen to their impeccably constructed and hummable songs and harmonies. For this FdM release, Keith Jones created a "best of" compilation from the band's first four CDs (Uncanny Tales from the Everyday Undergrowth, Take Time to Wonder in a Whirling World, Scarecrow Smiles, and Wandermoon) as a vinyl release. Initially meant to be a single LP, Keith found it challenging to limit the number of songs, so this project rapidly grew to a double LP plus an EP of demos. In addition to the demos and previously released songs, there are two songs exclusive to the release (title tracks), as well as two songs from their forthcoming fifth album, False Light. Every song fits so well together that it is difficult to name favorites. And in typical FdM fashion, this limited edition vinyl set of 600 copies comes in a beautiful gatefold cover.

Homestead & Wolfe - Our Times – Homestead & Wolfe represents an obscure bit of early 70s Bay Area music history. The name refers to the location of the church in Cupertino, California, where this group formed out of a youth...  (2006) » Read more