The Smell of Incense — Through the Gates of Deeper Slumber
(September Gurls SGCD15, 1997, CD) 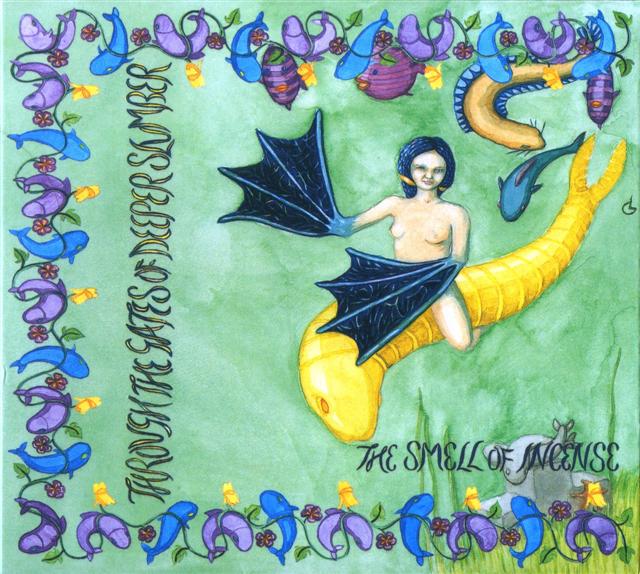 Breathe deep the gathering gloom, watch lights fade from every room, and for the next 50 minutes The Smell of Incense will transport you to hidden and fantastic realms! To speed you on your journey TSoI incorporated poetry by some of the finest authors of adult fantasy and science fiction literature: Lord Dunsany, Clark Ashton Smith, Robert E. Howard, Michael Moorcock, Brian Lumley, and Cicely Mary Barker. An interesting aside is Lord Dunsany was the father of adult fantasy literature having strongly influenced H. P. Lovecraft, Robert E. Howard, and Clark Ashton Smith and secondarily Michael Moorcock and Brian Lumley. And now, nearly a century later, the music of TSoI.

The disk opens with TSoI’s "A Floral Treasury," an epic undertaking spanning 25 minutes that includes three poems from Cicely Mary Barker, the author of the Flower Fairy Books from the 1920s. Part one, subtitled "The Song of the Winter Aconite Fairy," is a sitar/tabla/Mellotron tour de force invoking images of Scheherazade and the 1001 Arabian Nights. As you gently float through darkened star-filled skies, fluttering fairy wings suddenly attack bringing you down to earth and the techno sounds of "The Song of the Nightshade Fairy." As strange as it may seem, TSoI’s use of a techno beat integrates flawlessly with their music. Rounding out this opus is "The Song of the Queen of the Meadow Fairy" which returns with Mellotron choruses, raga rock, and at the end, a calliope/merry-go-round collage reminding me of King Crimson’s closing on Lizard.

The second song is Michael Moorcock’s poem "Columbine Confused." Moorcock is a prolific writer best known for his Elric of Melniboné books as well as his association over the years with the band Hawkwind. But make no mistake, "Columbine Confused" is not a Hawkwind cover, it is TSoI at their purest with Mellotron, guitar, drums, and Bumble B’s lovely vocals. The third song is Lord Dunsany’s "A Word in Season," published in 1929 in Fifty Poems, set to music. Writing in 1972 about this collection, Lin Carter stated that Dunsany’s poems “... seem to me particularly outstanding lyrics.” I couldn’t agree more and perhaps Lumpy Davy read the same passage inspiring him to compose this music. There is a mixture of musical influences here ranging from The Incredible String Band to the Moody Blues all held together by Han Solo’s Mellotron. Closing out the disk is "From the Third Hemisphere," another three part psychedelic masterpiece incorporating Clark Ashton Smith’s Atlantis, Brian Lumley’s Kraken, and Robert E. Howard’s Slumber. Here we have a further healthy dose of Mellotron as well as Bumble B’s electric violin. As their first release was primarily cover songs, TSoI have surpassed themselves on Through the Gates of Deeper Slumber with all original music. TSoI have paid their dues and are now ready for the recognition and accolades they so richly deserve! If you have any interest in bands like King Crimson, early Moody Blues, Incredible String Band, Renaissance, It’s a Beautiful Day, Wind in the Willows, Gong, early Pink Floyd, (and the list goes on) you will not be disappointed by TSoI. If you can’t find this release, either vinyl or CD, at your favorite record store, demand that they stock it. Highly recommended.