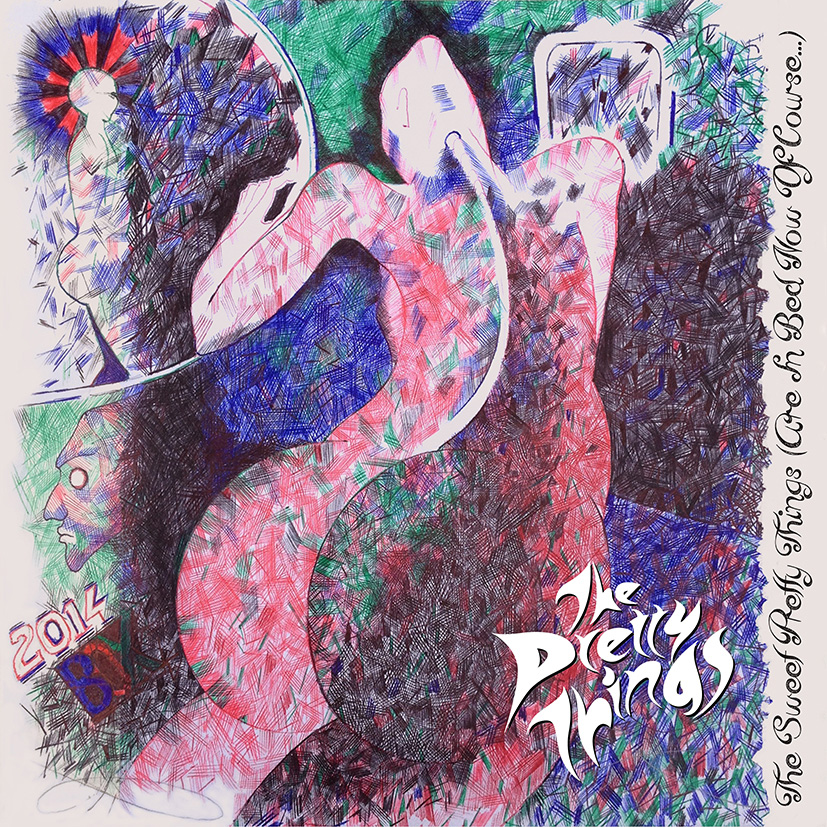 Who would have thought that after 52 years The Pretty Things would still be going strong? The Rolling Stones is the only other band that comes to mind that continues to rock. In The Pretty Things case, their secret is infusing new blood into the band. There are only two original members left: Phil May (vocals) and Dick Taylor (lead guitar and vocals). The rest are babes in comparison: Frank Holland (lead guitar, Mellotron, and vocals), George Woosey (bass guitar, rhythm guitar, and vocals), and Jack Greenwood (drums, percussion, and vocals). Phil May had a serious health scare last year, but his resilience has allowed him to continue leading the band today. For example, when recording closing track “Dirty Song,” Phil composed the lyrics as the tapes were rolling. This new album is the first new Pretty Things album in seven years, the title being the first line of Bob Dylan’s classic “Tombstone Blues.” But there is nothing on this new album that will keep anyone in bed! The ten tracks are amazing and if you had no idea of the band’s history, you would think this is a contemporary band. The opening song “The Same Sun” is almost arena rock with its strong beat and catchy melody and lyrics. The focus is definitely on the vocals and the song reminds me of another song from years ago, but the memory eludes me. Track two is “And I Do,” a gritty rocker, not quite retro, but a definite 70s vibe and tasteful guitar solo. The third song is a cover of David Crosby and Roger McGuinn’s “Renaissance Fair” from Younger Than Yesterday. The Pretty Things released a live version of the song on their 2012 Fruits de Mer live single. In my opinion their live version is superior to the studio version. And I have difficulty adjusting to their cover as I have been listening to the Byrds’ original for almost 50 years. But to newcomers, this will not be an issue. Track four is “You Took Me by Surprise,” a tasteful slice of psych with a Hendrix vibe. At this point the album takes off. Track five, “Turn My Head,” is pure West Coast psych, almost in Grateful Dead territory, with some fantastic guitar work. Then setting controls to dark sinister psych, The Pretty Things give use “Dark Days,” drawing heavily on late 60s/early 70s psych. The first instrumental track follows, “Greenwood Tree,” which happens to be the best on the disc. This is powerhouse psych at its best! When was the last time you heard an outstanding drum solo? There are probably many others, but what comes immediately to mind are tracks by The Doors, Cream, Iron Butterfly, and of course Guru Guru. But those were decades ago. To calm things down, the next song is “Hell, Here and Everywhere,” which is a Southern country blues song that for some reason reminds me of Long John Baldry’s “It Ain’t Easy.” Then there is another instrumental, “In the South,” with a tribal beat, catchy riff, and wordless singing. And, as mentioned above, the album closes with the superb “Dirty Song,” a dark gothic psych, stoner dirge song. The music holds your attention, but will mellow you out. Highly recommended!