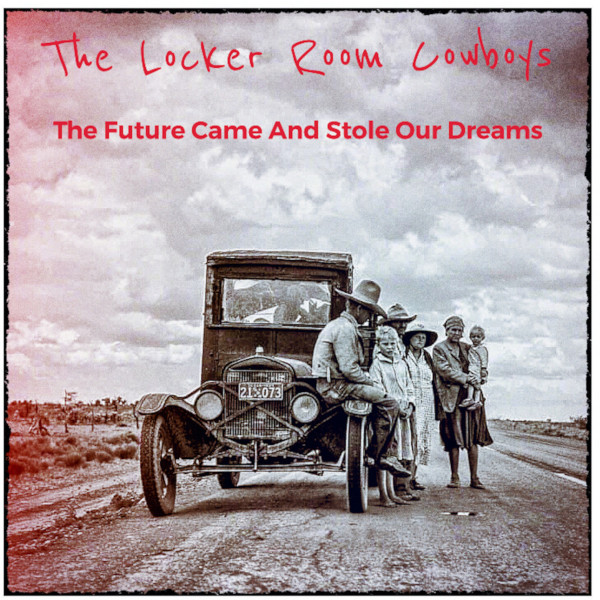 The Locker Room Cowboys’ debut release has been intriguing me for quite some time, starting with the cover art. The cover photo is from May 1937, taken by Dorothea Lange for the Resettlement Administration, and captures the angst of one of three related Oklahoma drought refugee families on the highway near Lordsburg, New Mexico, going to Roswell to chop cotton. Nearly a century later and half a world away, the UK’s West Country bassist Andy Budge (Icarus Peel’s Acid Reign, Cary Grace, The Honey Pot) used this image to set the stage for his twelve songs. Andy and The Locker Room Cowboys first appeared on Fruit de Mer’s 2018 compilation The Three Seasons with their cover of the Rolling Stones’ “We Love You,” which appeared again on FdM’s 2020 epic compilation A Band for All Seasons. It took several years for Andy to pull his debut album together, enlisting John Garden of Scissor Sisters and Alison Moyet's band on guitar and keyboards, Icarus Peel on guitar and vocals, Charlie Benson of Steepways on vocals, Crystal Jacqueline and Evie Budge on vocals, and Victoria Reyes of The Honey Pot and The Cary Grace Band on piano. The result is set of exquisite aural treats that incorporate elements of progressive rock, 80s Peter Gabriel, Popol Vuh, Indian drones, Roger Waters, and Pink Floyd. Charlie Bateson’s melancholic vocals on “Most of You” work brilliantly with the spooky and trancelike drones. Another album highlight is the seven-minute “Revolutions” that grows on you, especially with Victoria Reyes’ delightful piano work that contributes to a comparison to “Hey You” from  Pink Floyd’s The Wall. Then there is the lovely Mellotron ballad “I’m Sure I Will” with additional mellow piano and other rich sonic textures. Quite an impressive and interesting debut.