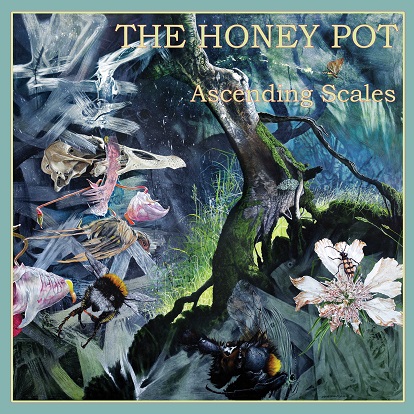 After eight years as an independent label, Fruits de Mer Records marks its 100th vinyl release with a double gatefold LP by The Honey Pot called Ascending Scales. And in the usual FdM format, Ascending Scales is a mixture of classic and obscure psych / prog rock covers plus some original Honey Pot songs. And to join in the celebration of this milestone, Keith Jones, in concert with Icarus Peel and Crystal Jacqueline, enlisted the aid of a number of illustrious guests including Dick Taylor (The Pretty Things), James Lowe (The Electric Prunes), Tom Newman (July), Peter Cook (July), Nick Saloman (The Bevis Frond), Ade Shaw (Hawkwind, Hawklords, and The Bevis Frond), Judy Dyble, Anton Barbeau, Ilona V, Brian Rushbrooke (Stemroach), Cary Grace, Us & Them, Gregory Curvey (The Luck of Eden Hall), Jack Ellister, Steve Palmer (Mooch), Mordecai Smyth, and Tony Durant (Fuschia). Keith’s guidelines to Icarus were basically include as many guests as possible and to perform some old songs, new songs, and borrowed songs. The recording was done in The Honey Pot’s Devon studio with the guest contributors trading their parts back and forth over the internet, except for Cary Grace who joined them over a weekend to sing with Crystal Jacqueline. The double LP contains fourteen different songs and a range of styles.

Disc One opens with a cover of Stemroach’s “1969” including an intro narrative and then vocals by James Lowe to accompany the acid jamming organ and electric guitar. The next song is another Stemroach cover, “Solomon Deep.” Stemroach’s drummer Brian Rushbrooke joins The Honey Pot on bongos along with some cheesy organ to create a hard rocking cover tune. The third song is updated version of The Honey Pot’s “Love Is Green” from their first album. It opens with acoustic guitar and Crystal Jacqueline’s beautiful vocals. In the second half Jack Ellister enters with excellent electric guitar to propel this song into acid jam territory. Then we take a step back in time for a cover of the Orange Machine’s “Dr. Crippen’s Waiting Room” complete with 60s ambiance, Anton Barbeau’s vocals, and some cool cathedral organ runs. Next we have a cover The Rattles’ “Can’t You See the Witch” from 1970. This is an energetic song featuring both Cary Grace’s synths and vocal duet with Crystal Jacqueline. The first new song is the freaky, trippy “Half a Memory” with its kooky organ solo and vocals by July. Next is a tune penned by Dick Taylor “Sitting All Alone.” And if that is not enough to entice you, this exquisite song features the pure vocals of Judy Dyble, Britt (Us & Them), Ilona V, and Crystal Jacqueline in four part harmony. This song by itself is a testament to the loving care The Honey Pot put into the production, coordinating multiple inputs into this one song. Disc one closes with a Mordecai Smyth song from his first album, “I’ve Been So Tired.” This song starts out sonically different from all that has gone before in that there is an industrial feel to the intro. It then develops into an excellent and trippy psychedelic jam of guitar, saxophone, and keyboards.

Disc Two opens with a cover of a Stray song, “Time Machine.” This song features a fantastic guitar solo by Nick Salomon and bass by Ade Shaw. The song starts out slow and then Nick steps the tempo up with his playing in the middle break. The music slows back down only to rev up again as the song rushes to its end. The next song is a reimagining of Icarus Peel’s "The Wasted Spaceman” from Sing!! by Gregory Curvey of The Luck of Eden Hall. Gregory took it upon himself to make the song more upbeat, change the lyrics to “The Lucky Spaceman,” and make it his own. Then The Honey Pot presents a dreamy atmospheric cover of Strawberry Alarm Clock’s “Rainy Day, Mushroom Pillow.” The Mid-Eastern motif from Mooch and the electric piano and harpsichord give this song a West Coast psych treatment, even resembling “Riders on the Storm.” Then The Honey Pot presents an ambitious cover of Keith Emerson’s “America” from The Nice’s Ars Longa Vita Brevis. Having listened to Emerson’s keyboard licks on this song since 1968, I find it difficult to separate my expectations from what I hear on this track. Keyboardist John Wyatt tries his best. Though his performance may be note perfect, some notes seem to be held slightly too long, and overall it lacks the punch provided by the maestro. Next is a re-recording of The Honey Pot’s “Into the Deep” released earlier this year on Mega Dodo. This new version is twice the length of the original and features Bruce Wooley. This song has a very strong West Coast Doors influence, as well as a Jules Verne sci-fi ambiance. There are swooping Theremin sounds and tasteful electric piano to carry you drifting away at the end of the song. And the disc ends with a brand new song “River Runs By.” Icarus came up with a chord sequence based on Nick Drake’s “River Man” and sent that to Tony Durant in Australia. Tony was fascinated by the sequence and then asked for the lyrics and melody, only to be told that it was his job. The result is a pastoral singer-songwriter ballad with acoustic guitar, violin, and piano with a retro vibe drawing obvious comparisons to Nick Drake. This beautiful song is over before you know it. It is just too short!

I have to say that Ascending Scales is a wonderful celebration of turning 100. It is hard to believe that FdM is only eight years old. They have firmly planted themselves in the musical community. Now we can only forward to the next 100 releases. Congratulations!