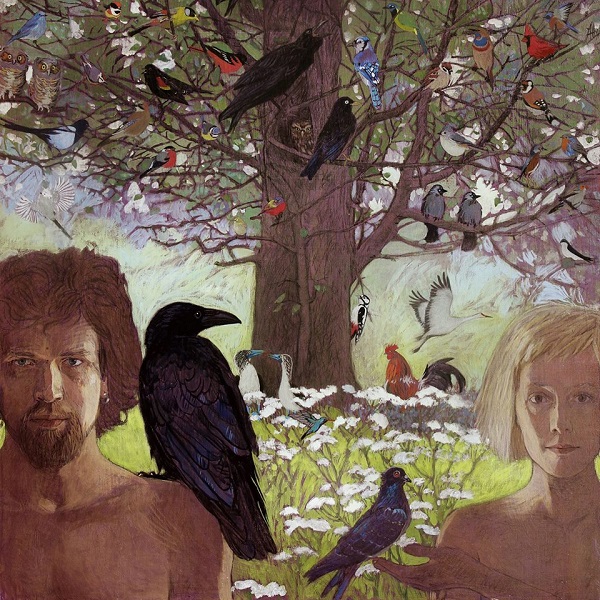 As the other Exposé writers have expressed, one of the joys of this job is being exposed to a wider range of music and artists than you normally encounter through the regular channels. A case in point is the Russian duo (Alexandra Zhuravieva and Simon Gendor) The Grus and their debut release Nest. Their sound is characterized by Alexandra’s breathy vocals and Simon’s synths and guitars. Plus they get a little help from their friends Cody Carpenter (keyboards), Antip Suratov (guitar), Vladimir Sapunov (trumpet), Grant Hiers (synths), Ksenia Ermakova (trombone and flute), Nina the Crow (percussion), and the Blue Frog Magpies (percussion). All ten songs were written by The Grus, except the lyrics on “To Be a Child” are from William M. Golden (1918) and “Take Me” with basic lyrics from Frances R. Havergal (1874). The music is somewhere between experimental electronics and pop, but not fitting in really anywhere. Most of the arrangements are quite minimalistic with a basic rhythm, electronics, and Alexandra’s vocals. Sometimes, as on “Welcome to the Night” the music has a grungy texture and tends to the industrial side of things. There are some touch points with the post-punk New Wave movement of the 70s/80s. For example I detect some influence of the Young Marble Giants. The first half of the disc contains a number of songs with repeated lyrical phrases. It is not until you reach the seventh track, “Home,” that you hear what you would normally consider a song structure. There is a distinct melody, movement, and structure. I particularly like “Jupiter” that is quite weird and cosmic at the same time, and the only instrumental on the disc “October Road.” “October Road” is a beautiful piano ballad accompanied by field recordings of a train, and we are almost in David Lynch territory here. The closing song “So Glad I Am Here” starts out like most of the other songs with minimal orchestration, but with a melody and song structure. Then in the last minute it takes an abrupt change in direction with movie dialog, odd electronics, and other experimental structures. If you enjoy chilly, eerie, experimental pop music, then by all means this release is for you.