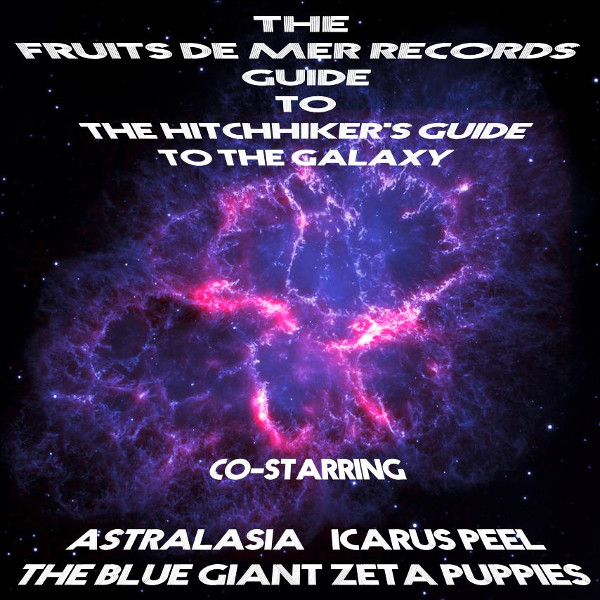 I was never an Eagles fan. They were too mainstream for my tastes. So I had no idea that the BBC used their one excursion into space rock, “Journey of the Sorcerer,” as the theme music to the TV dramatization of Douglas Adams’ The Hitchhikers Guide to the Galaxy. Fast forward 40 years and this summer Fruits de Mer decided to try something completely different rather than merely featuring Eagles covers. They enlisted FdM regulars Astralasia, Icarus Peel, and the Blue Giant Zeta Puppies to create three wildly different cover interpretations of The Eagles' tune. In addition to the 7-inch single, FdM is also including a bonus CD of remixes of The Eagle’s track plus another version by the Quantum Surf Rocket Garage Dolls that could not fit on the vinyl. The CD also contains new music by Astralasia and Sendelica’s Pete Bingham. However, the CD tracks were not provided with the promo copy, so we will all have to wait for the August release to hear the bonus music. The 7-inch proudly kicks off with Astralasia’s repurposing of the theme liberally using the VCFs and VCOs on their analog synths to create an abstract intro. Then they launch into the theme with a heavy beat that propels the entire energetic piece for some great prog-psych music. The tune ends with sped up voices saying, “So long and thanks for all the fish.” In stark contrast is Icarus Peel’s slow and quiet version. He uses wah-wah guitar and a voice slowed down to a growl. For the bulk of the track it is hard to detect that this is a version of “Journey of the Sorcerer.” About two thirds in, there is a great Hammond organ solo that leads into the theme. The third version by the Blue Giant Zeta Puppies relies on a bass riff similar to “Peter Gunn.” All three are quite different and quite fun to experience.