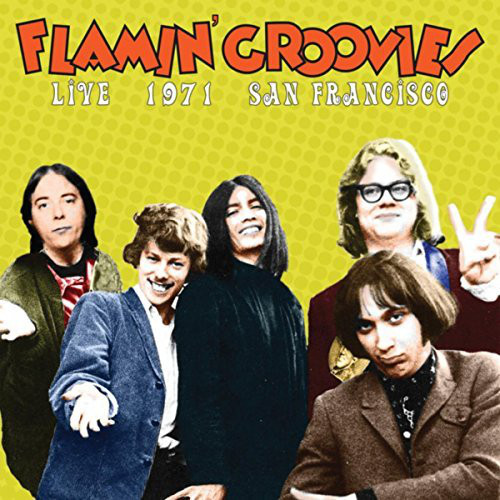 When Bill Graham closed the Fillmore West in 1971, there was a solid five days of concerts to honor the venue. Proto-punk garage rockers the Flamin’ Groovies were one of those acts. The band had endured a love / hate relationship with Graham due to the fact the their first manager had been Bill’s right-hand man and when he quit to manage the Flamin’ Groovies it took its toll. In the late 60s and early 70s the Flamin’ Groovies were the house band for two summers in a row at LA’s Whiskey-A-Go-Go where they enjoyed respect. However, when they played the Fillmore West, they were treated like dirt, be it the treatment from the staff, stage manager, sound people, ticket takers, light show, etc. And that is in evidence in the awful sound quality of this live recording. The sound is muffled and tinny. The cymbals and drums overpower the music, with the vocals so far down in the mix that sometimes it is difficult to understand the lyrics, let alone enjoy the performance. During their set, they ran through several cover tunes “I Can’t Explain,” “Sweet Little Rock and Roller,” “Have You Seen My Baby,” “Shakin’ All Over,” “Louie, Louie,” and “Walkin’ the Dog,” interspersed with a few original numbers: the extended psych jam of “Road House,” the boogie tune “Doctor Boogie,” the blues rock of “Slow Death,” and the garage rock “Teenage Head.” The performance sounds a little rough around the edges, which could be the fault of the recording. But you can tell that the crowd loved them. However, due to the below par quality of this recording, there really is nothing to recommend, unless you are a Flamin’ Groovies completest.

Kurt Reifler - Kurt Reifler – The first comparison that came to mind when I started on these tunes was Lenny Kravitz, though with more down-to-earth production and less self-important posing. There's also a hint of Living Colour,...  (2008) » Read more