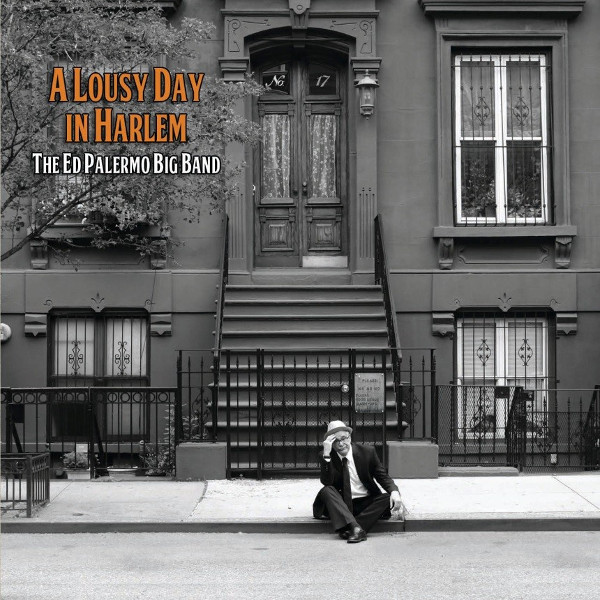 After six albums on Cuneiform, all nothing less than superb, the Ed Palermo Big Band is back in action on Sky Cat records with A Lousy Day in Harlem, this time taking it in a slightly different direction from his previous releases, which mostly focused on compositions by the late great Frank Zappa, and more recently Todd Rundgren, and The Great Un-American Songbook which focused on British pop music of the last 50 years, two full length discs of great songs arranged in his big band style. On most of his previous albums, with the notable exception of the second disc of 2014’s Oh No! Not Jazz! there were very few of Palermo’s original compositions scattered through these, but the new disc rectifies all that, featuring roughly half originals in a solid jazz style scrambled with some classic and lesser known jazz covers. It doesn’t take more than one spin to recognize that the original compositions presented here are every bit as good as the covers of Monk, Coltrane, Ellington, and others, in fact the thirteen piece set is surprisingly cohesive beginning to end. The opener, “Laurie Frink,” is a Palermo original, a strangely familiar piece that sets the album off on a good foot for everything that follows, shifting through a number of different styles and emotions as it proceeds over its eight minute duration. An original closes the album as well. “This Won’t Take Long” is a playful and expressive piece full of joy and adventure. In between there are many noteworthy pieces, both originals and covers, starting with the absolute standout “Sanfona,” written by Egberto Gismonti, a stunningly melodic piece that will live on in your head all day, driving forward though a number of powerful passages gently propelled by a potent rhythmic figure, and the big band truly brings it to life led by Phil Chester’s soprano sax. “The One with the Balloon,” another Palermo original, makes for a pleasurable romp through numerous variations on several recurring themes, all culminating with a tap-dance solo by guest Nicki Denner. Bristling with energy on the go is Duke Ellington’s fast paced “Brasilliance,” featuring outstanding solos for piano, clarinet, and trumpet. Coletrane’s “Giant Steps” launches with the dueling tenor saxes of Ben Kono and Bill Straub doing the theme from Deliverance, followed by a full-band interpretation that would make Coltrane proud, with a little Zappa twist at the very end. “The Cowboy Song,” another Palermo original, struts its stuff with a powerful swagger and Chester’s gentle soprano sax leading the way. In summary, A Lousy Day in Harlem is a magnificent day for jazz, and a powerful statement by this sixteen piece unit and Palermo as a composer.