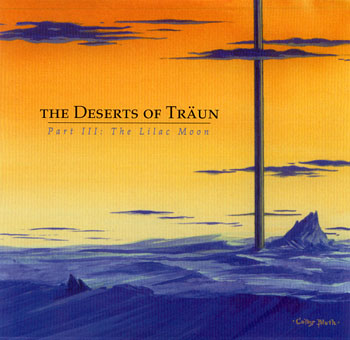 The Deserts of Träun is the musical project of former Estradasphere drummer David Murray. The project name and initial story theme originated from a high school jazz band collaboration between Murray and Joe Willis that was based upon the Disney science-fiction movie Tron. The story later evolved into several pieces of music, but none of it has ever been professionally recorded or released until now. On Part III: The Lilac Moon, Murray plays drums, didgeridoo, guitar, bass, flute, and also sings. He’s joined by a variety of guest musicians who contribute guitar, bass, vocals, mandolin, strings, and sax. The hour-long album is made up of 24 short tracks that flow together as one long piece. Listening to the music, it’s not difficult to hear it as the soundtrack to an imaginary post-apocalyptic science fiction story. The song titles help guide the listener along the way, but it’s pretty obvious that certain songs represent detective themes, battle themes, and princess themes. Murray’s drumming ability is nothing short of astounding throughout. He plays double bass fluidly and riffs across time signature changes with ease. Part III: The Lilac Moon is a showcase for Murray’s compositional skills too. Many sections of the songs are orchestral and acoustic-based and don’t even contain percussion. The cross-genre experimentation that he began in Estradasphere continues here. Metal, jazz, classical, lounge, world, and electronic music collide to create an intricate and interesting interplanetary soundscape. Very impressive.

Related artist(s): The Deserts of Träun