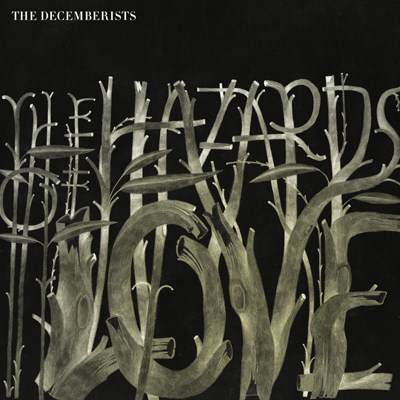 With each successive release, The Decemberists seem to get more proggy. Their brand of folk-oriented rock owes more to Jethro Tull and Strawbs than the Byrds and CSNY. Leader Colin Meloy’s stories are as old-fashioned and literate as ever, this time worked into a full-on concept, with the songs running together and various themes (musical and lyrical) recurring in variations, and in fact it could be called a rock opera. Four vocalists cover the characters: Shana Worden and Jim James of My Morning Jacket, Becky Stark of Lavender Diamond, and Meloy himself. The story was inspired by an old Anne Briggs album with the same title, and concerns a jealous forest queen, a woman who falls in love with a shape-changing forest spirit, and a villainous Rake. The instrumentation includes banjo, acoustic guitar, accordion, pedal steel guitar, and upright bass augmented by some very proggish keyboards and occasional more orchestral moments, even including a children’s chorus backed by harpsichord and a very warped synthesizer tone. And there are some grand heavy riffs as well, bringing the rock in no small way. To my ear, it succeeds on every level, and given the band’s major label status, it’s great to hear something so obviously progressive get the kind of attention they get. Prog fans certainly should check this out.