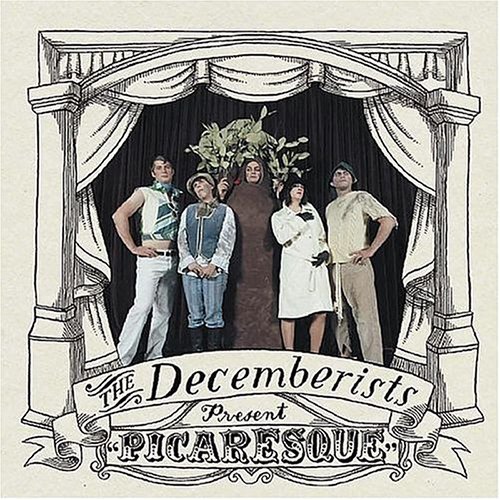 This Portland, Oregon band has been the subject of a lot of buzz in the American indie rock community, and for once the praise is well-deserved. Far from being a trendy neopunk band or lo-fi electronic outfit, the Decemberists are an eccentric folk-rock collective with a strong dramatic streak. The songs tell stories of shipwrecked mariners, Cold War spies, star-crossed lovers, and the ghost of “Eli, the Barrow Boy.” Instrumentation ranges from acoustic guitar alone to quite elaborate, played by the five members with assorted friends on strings, horns, and so on. Songwriter Colin Meloy’s literary background shows in both subject matter and the words themselves – when was the last time you encountered “palanquin” or “privateer” in a song lyric? For all the orchestration and literate turns, they avoid pretense. A touch of humor helps – as the album title suggests, the stories are picaresque, not philosophical; and the orchestrations manage to retain the feeling of a bunch of friends gathered together to have fun rather than serious professionals presenting serious art. I’m reminded of early 70s Strawbs crossed with something like Neutral Milk Hotel. The arrangements are full of imaginative touches, like the many changes of tempo, time signature and mood in “The Mariner’s Revenge Song.” In the booklet, the band members pose wearing makeshift costumes with cardboard sets to illustrate the songs, emphasizing the do-it-yourself drama of the music. With their new extensions of old character-driven traditions, the Decemberists provide a welcome respite from love songs and teen angst.