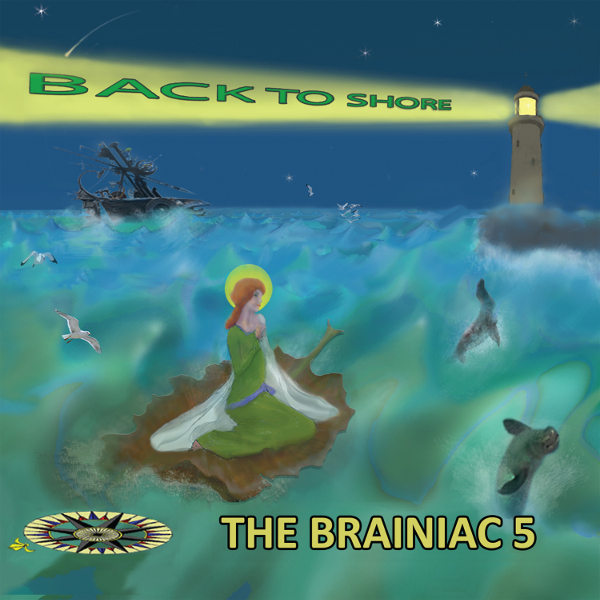 Moving along from 2017’s Journey to X, we find The Brainiac 5 dishing out more of their punk-inflected space rock on Back to Shore. “Long Enough” starts us out in a place somewhat reminiscent of Hawkwind (or Hawklords). The title suite in four parts comprises the bulk of the album, about 35 minutes long, with a wide variation in sound in its sections. They indulge in some odd combinations, such as the beginning of the second part, “This Way,” which features kalimba, jaw harp, hand drums, and harmonica backing reggae-style toasting with a wah-wah guitar providing counterpoint. Can’t say I’ve ever heard anything like that. Later in the same piece we hear bagpipes and something that sounds like accordion (which isn’t listed in the credits). The band created the title suite by recording loops and sharing them with musicians, some of whom had never heard the band, then compiling the contributions, finding that the new directions explored opened up many sonic possibilities. These four tracks are quite interesting, full of surprises and providing a kind of spontaneity, something you might call “assembled spontaneity,” where separately created spontaneous parts are put together and used as further springboards to new ideas. Setting aside the method used to create the music, in some ways the result has a lot in common with German experimental rock of the early to mid 70s, like Embryo, Can, and their contemporaries. There’s a relatively simple rock base which can be augmented by nearly anything imaginable: instruments from around the world, electronic manipulation, vocals (with or without lyrics), guitar or sax solos, whatever. And it works, though I suppose some listeners might find it a little scattered for their taste. For those listeners, the other tracks can provide a solid object with enough handholds to provide comfort. In addition to “Long Enough,” “What We Can” and “Breaking Up” provide song-oriented structures and counterbalance the more nebulous “Back to Shore” suite. All in all, another winner and step forward for a band deserving of wider attention.