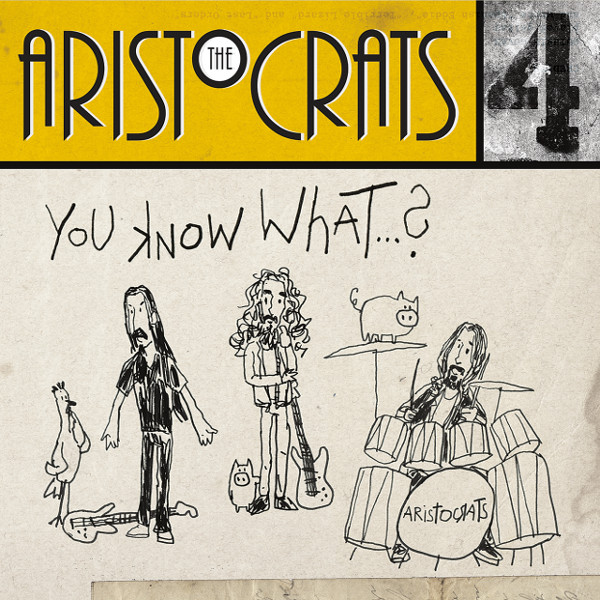 It’s been a few years since The Aristocrats’ last studio album Tres Caballeros, apparently off doing more lucrative projects, tours, and such in the interim. But the trio hasn’t lost any of their creative powers and instrumental prowess during that time, and their latest release certainly offers substantial proof of that, as well as an earnest attempt to reach out into some new directions, while retaining their identity as a purely instrumental g/b/d trio. Firstly, You Know What…? comes in two versions, one is the standard version with nine tracks (which is what this review is based upon), the other has a DVD with a thirty-plus minute “The Making of You Know What…?”, demo versions of all nine cuts, and a few extras to top it off. The band remains the same: German master drummer Marco Minneman, American bassist Bryan Beller, and British-born guitarist Guthrie Govan, a truly international crew that apply an amazing amount of experience to their collective craft. For those who prefer their muscular shredder style, “Terrible Lizard” and the opener “D Grade F*ck Movie Jam” will be the album’s high points, but there’s a lot more to savor here than simple shredding, case in point being “The Ballad of Bonnie and Clyde,” an almost eight-minute piece that encompasses some beautiful melodic guitar over a paced rhythmic figure laid down by Beller and Minnemann until it hits the next level at about a minute and a half in, each step progressing in intensity while Govan maintains the melodic strength and builds upon it over time, taking time out for some brilliant soloing as well. “When We All Come Together” could best be described as instrumental shit-kicker country rock, not unlike something that the Dixie Dregs might have done back on their first few albums, although here we have a little less predictability which keeps things very interesting. “All Said and Done” starts as a somewhat mellow jazzy number, but finds its stride with a funky bottom end and some bass soloing from Beller. With “Burial at Sea” the trio takes a somewhat jazzy psychedelic opening, then changes over to heavy pummeling and then back again, and again, this one is a pretty wild ride crossing between the poles, but it’s an effective means to keep the piece interesting over the long haul, which is what matters most. The Aristocrats are staying true to their origins, but at the same time reaching out to many things new.