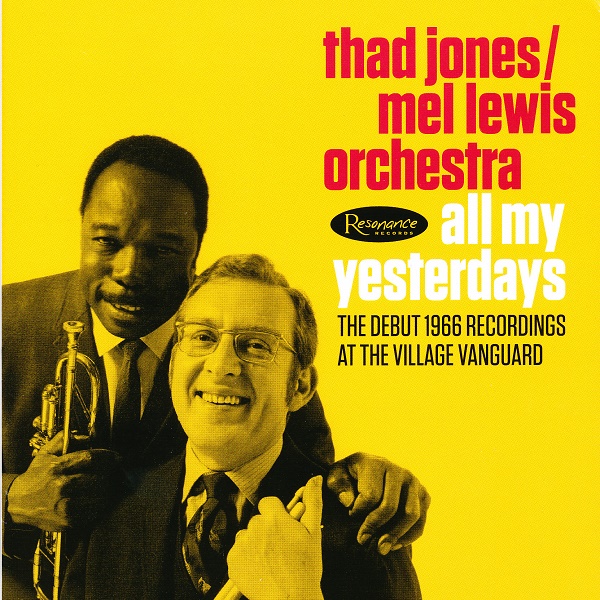 After spending the last few months diving into some classic Duke Ellington and Count Basie recordings, I was excited hearing about this new release from one of the best-known of a later generation of big band jazz. Trumpeter Thad Jones, a Basie alumni who’d made a name for himself both as a player and for his compositions and arrangements, got together with drummer Mel Lewis, who’d played in Stan Kenton’s band, for weekly informal rehearsal sessions with some of the best jazz players in New York at the time. These workshops led to live performances, and what came to be called the Thad Jones / Mel Lewis Jazz Orchestra. As it happens, their first public performance was at the Village Vanguard on February 7, 1966, and George Klabin was in the audience with his tape recorder. What he captured was pure magic. An audience recording from 1966, you say? Sounds like crap, right? Far from it. With only very minor issues, this recording stands comfortably with professional studio recordings of the time, with a presence and immediacy that is remarkable. Klabin’s setup was quite unusual for the time. He had six microphones placed around the bandstand, ran them into a mixer, and recorded direct to two-track reel tape. Close your eyes and you are there, with the enthusiastic responses of a small club audience, interjections of appreciation from band members, and the occasional (very rare) fluffed note. Waiter, bring me a manhattan, and make it a double, please.

If you think of music like Glenn Miller or Benny Goodman when you think of big band jazz, you’re in for a shock; if you think of Maria Schneider or Toshiko Akiyoshi, you’re looking at the number one influence. Thad Jones took the sophistication and innovation developed by Duke Ellington and Stan Kenton (not to mention learned during his own tenure with Count Basie) and bumped it up, with very dense chords featuring tight intervals and dissonance to a sometimes uncomfortable degree. And the complex polyphony between the sections often presents almost more than a listener can absorb. But along with all of the fancy chords and tricky parts, they swing like hell, with an energy level that’s amazing. We get 48 minutes from that night's two set, including two takes on “Big Dipper,” the title track, “Mornin’ Reverend,” and two extended pieces, “Back Bone” and “The Little Pixie.”

But wait, there’s more! Klabin was back on March 21 for another night with the band, and captured over an hour of music, with the band again in top form, with a few different players and a bunch of new tunes. “All My Yesterdays,” “Back Bone,” and “Mornin’ Reverend” are revisited, and they take on a few standards (“Willow Weep for Me,” “Polka Dots and Moonbeams,” and “Lover Man”). The personnel is slightly different but equally powerful.

Some of these recordings have previously surfaced on bootlegs, but this is the first legitimate release, and it documents very special time for a very special ensemble. As if the music weren’t enough, Resonance has packaged it all in an oversized tri-fold which includes a 92-page book. There are interviews with all of the surviving band members (a sadly diminished number after 50 years), as well as several other players who were with the Orchestra at later times. The interviews contain similar questions, so it’s interesting to get perspectives from different people, sometimes very divergent, but agreeing on many things. Some of the overall themes are that the musicians were aware from the very first rehearsal that this band was something special, and that was due in large part to the innovative arrangements of Thad Jones, though trombonist Bob Brookmeyer is also credited with some of the arrangements. Another major point is that all the musicians recruited for the band were working professionals in New York, doing studio sessions backing pop singers, playing in the TV bands of Merv Griffin, The Tonight Show, and so on, playing on advertising jingles – busy guys. While some of them were as young as their 20s, others were seasoned long-timers, and they could all sit down in front of an unfamiliar chart and sight-read it without errors. Compared to their other work, the Thad Jones / Mel Lewis gig paid a pittance, but they loved the music so much they did it anyway. And lastly, both Jones and Lewis were great to work for, warm-hearted leaders not ego-maniacs. All in all, this is a great historical document from jazz history, and the way Resonance has preserved and documented it is beyond valuable. Many jazz fans tend to concentrate on the great small groups – Miles Davis, John Coltrane, and so on – as the landmarks in the development of the genre, but this set is proof that larger ensembles were still a viable and exciting proposition at the same time as free jazz was blooming and the beginnings of jazz-rock were incubating.