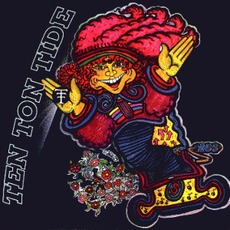 Their logo looks like the Gentle Giant guy got a hair transplant and was so happy that he shaved his beard. Pretty cool! At any rate, Ten Ton Tide's album is an interesting combination of straight-ahead and prog rock, with the occasional intrusive venture into the realm of Bon Jovi pomp. The best things about this album are the instrumental sections, which fortunately are numerous. The bass player is especially good in these sections – throughout the entire album for that matter. His sound and playing style remind me a lot of Geddy Lee. Does he use a Rickenbacker too? The vocals and the supporting music tend to be less interesting. However, the production and recording quality is quite good. Vocalist Dennes Cynd sounds like a cross between Mick Jagger and Kip Winger. The lyrics are sort of strange, but a lot of them are about sex, which is a plus, and not often the case in prog rock. As you'd probably guess from my above comments, the instrumental "Panic in 9/4" (not to be confused with "Apocalypse in 9/8") is my favorite track on the album. Guitarist Al Pitrelli, who recently stinted with Asia – no not that Asia, the other one – contributes some of the guitar work which gives parts of the album a glam rock feel. Overall, the album is decent, but some of the ho-hum mainstream parts sound strange adjacent to some of the really nice instrumental sections. Check out the bass player though. He's pretty fun to listen to.