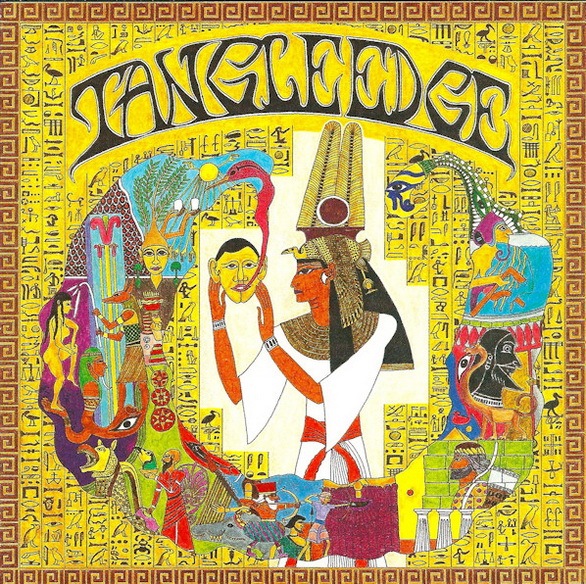 If one doesn't count all the bootlegs of this that have been floating around for the last few years, then it's really not a reissue - as it's never been legitimately available before. This is Tangle Edge's long lost second album, the followup to 1989's In Search of a New Dawn, and shows the band making significant progress, especially in the area of writing. For those unfamiliar with Norway's Tangle Edge, they play something akin to instrumental modern psychedelic raga-rock, with influence from the likes of early Amon Duul II and Third Ear Band. The first album was so authentically early 70's sounding that I couldn't believe it was recorded in the late 80's! The lineup here is pretty much the same as the first: Ronald Nygard on guitars, Sven Hugo Bergvik on flutes and sax, Hasse Horrigmoe on bass and twelve string, and Kjell Oluf Johansen on drums. The major difference is an overall more focused sound, and better developed material that doesn't sound quite so loosely improvised. The 23 minute "Walk of the Frozen Ones" in four parts is offered as the first bit of evidence. The opener recalls early King Crimson where saxes and guitars would carry the same melody line. Later, it moves into the more introspective territory of flutes and floating guitar leads winding around the rhythm. "The Cryptic Empire and the Principal Sanctuary" kicks off the two twelve minute tracks that occupy side two (of the original album. Again - more searing guitar, saxes, flute, and energy. Each of the album's three tracks goes through several metamorphoses - slow and gradual changes that guide the listener through a picture tour of their unique world. Highly recommended.

Spaced Out - Evolution – After numerous releases sticking pretty close to a singular style, this appropriately titled latest studio release by the band shows them trying out some new directions, while still maintaining close...  (2009) » Read more