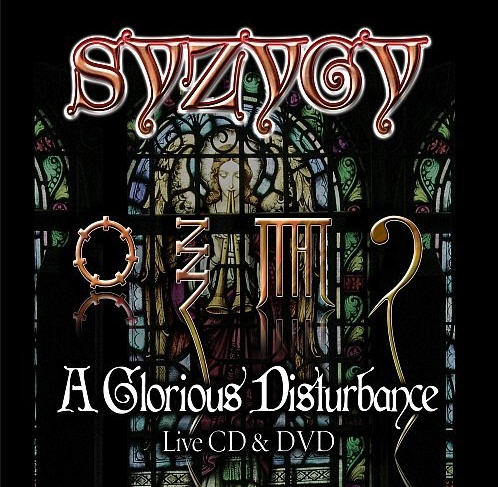 Nobody can accuse Syzygy of glutting the market with too much product; this lavish three-disc live package is only the band's fourth release in twenty years, but for anyone not yet familiar with this Ohio based quintet, this is by all means a fine place to start. And where to start? The main DVD features material from two shows: five tracks from the 2009 3RP Festival, and seven from the 2010 Day of Prog, both festivals in Pennsylvania. The latter features an encore of some familiar cover tunes – UK's "In the Dead of Night," and Deep Purple's classic "Burn," but all the other material is drawn from the band's three previous albums. It's important to understand that the band (originally called Witsend on their first CD) evolved from a mostly instrumental trio to the quintet of drums, keys, guitars, bass, and dedicated lead vocalist that they are on these live sets. Some of the early instrumental material from the first album Cosmos and Chaos has been pulled forward and rearranged with lyrics now, giving them an entirely new life. Nine of the band's original tracks on the DVD made it to the CD (only "The Sea" from 2009's Realms of Eternity didn't make it, presumably due to the limitations of the CD medium), but they are not presented in concert order, but rather shuffled together, making it a different listening experience. Which brings us to the 2nd "bonus" DVD, over an hour and a half of extras. There are three interviews: one with founding member and guitarist Carl Baldassarre, a short one with singer Mark Boals, and a four-way roundtable with all band members, minus Boals. Additionally there is a lengthy discussion of the band's compositions and arrangements on the Realms of Eternity album between Baldassarre and keyboardist Sam Giunta. Overall this is a great package, the concert DVD alone is worth the price of admission.