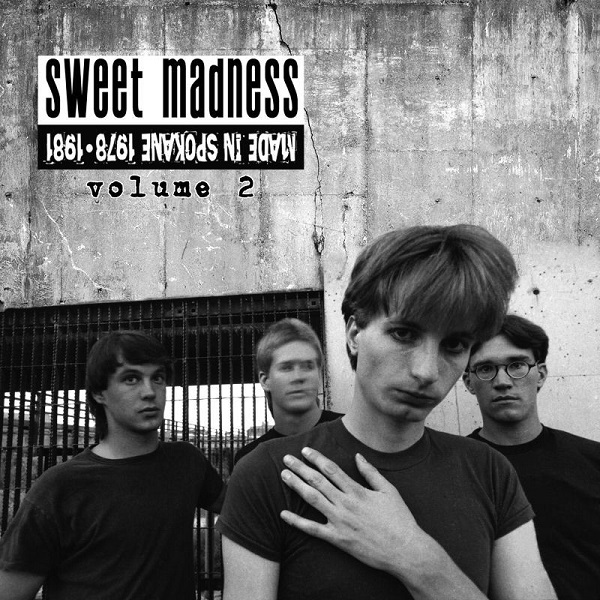 In my review of Made in Spokane I mentioned the unlikeliness of its mere existence, and now that defiance of odds is compounded by the release of Volume 2, 15 more tracks from this hyperactive Northwest band. As with the previous collection, the recordings date from 1978-1981, and several of the songs later showed up in the repertoire of successor bands Next Exit and Variant Cause. As someone who saw Variant Cause dozens of times in Seattle during their existence, it’s both disorienting and nostalgic to hear “Sleeping without You” and the others in this embryonic form, though maybe “embryonic” isn’t the right word. The compositions are complete, with lyrics, melodies, and all ready for prime time, it’s the youth of the band and somewhat primitive recording quality that marks the Sweet Madness versions. Certainly by the standards of modern recording (even of the home studio variety), these tracks are lacking, but there are so many positives that outweigh those negatives. Certainly anyone who remembers the band from its brief lifespan (admittedly a small audience), or those who encountered Next Exit or Variant Cause (a slightly larger group) should be thrilled to hear this. The question is: how does it work for everyone else? I’d say anyone interested in the art-punk of the early 80s should find something to like here. The early years of Devo, Talking Heads, and XTC are good reference points, and even something like Cardiacs (though Sweet Madness is not as audaciously loopy) provides an indication of the general area. Intelligent, quirky New Wave with touches of surf music and cynical (dare I say “ironic”) futurism. Smart kids with big ideas and no sense of limitations from others — a recipe for something interesting that has stood the test of time.

Landberk - Dream Dance – Landberk's second CD-EP breaks no new territory, nor develops on their practically patented style, yet again delivers the goods. While I find that their music isn't as translatable live (both...  (1996) » Read more

Alec K. Redfearn and the Eyesores are so cheerful