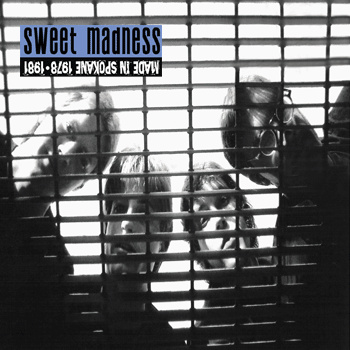 At the end of the 70s, as the importance, popularity, and artistic viability of ambitious progressive rock waned and stripped-down punk and electronic styles started capturing interest and commercial success, it seems natural that talented musicians (those capable of playing more than three chords) would find ways to apply artistic creativity to the new music. So we have XTC, Devo, Talking Heads, and others, sometimes referred to as "art-punk." Sweet Madness hailed from Spokane, Washington, a city 300 miles east of Seattle that often seems like it's in a totally different world, sitting between vast areas of farmland and the sparsely populated forests of the Inland Northwest. Somehow this group of kids came up with a frenetic artistic brew full of driving rhythms, futuristic angst, and weird chord progressions, all mashed up into something that superficially resembles early New Wave. Early Devo and XTC are probably the best comparisons. Made in Spokane is full of surprises: first, that it exists at all is strange; second, that it sounds as good as it does considering the age of the recordings; third, that the music is so inventive. Even on the earliest of these tunes, the aesthetic is established, with titles like "I Need Electricity," "Assembly Line," and "Mechanical Things" giving a clue to the themes of alienation and commodification that recur. Within the confines of short tracks, most of which are quite energetic, there's a lot of quirky invention. Bits of surf guitar, 60s combo organ, chaotic bursts of noise, taped voices, unexpected chord changes, and more lift Sweet Madness out of the morass of dumber-than-thou thrashing that typified many bands of the time, especially in smaller markets outside the main cultural centers. Some of the members of Sweet Madness eventually became a band called Next Exit and relocated to Seattle, where they went through a variety of personnel and name permutations (Variant Cause, Koo Dot Tah), always one of the quirkiest and most artistic bands on the scene, no matter what they called themselves. This collection is a treasure trove for music historians, but beyond that it's just a hell of a lot of fun to listen to.

Peter Hammill - X My Heart – Here's another work in the "difficult artiste" series from prolific songwriter Peter Hammill. How many releases does this make for him? Over 20, not including compilations? He has...  (1996) » Read more