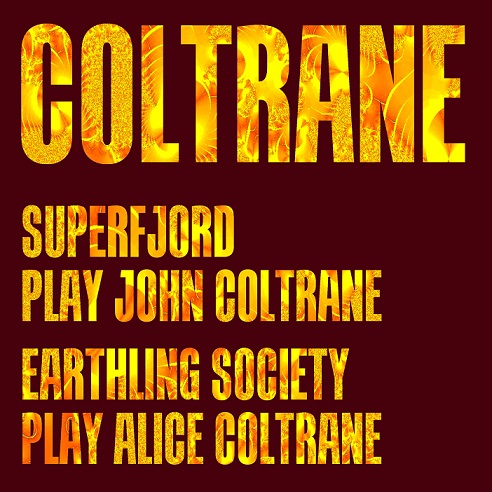 Here is a new release that is one of FdM’s most unusual pairings. John Coltrane was a renowned avant-garde jazz musician who helped pioneer the use of modes in jazz and was later at the forefront of free jazz. So how does Coltrane appear on a psychedelic music label? Well, Finnish band Superfjord has taken the first section of Coltrane’s A Love Supreme, “Acknowledgement,” and reinterpreted it / reinvented it as a trippy psychedelic/Krautrock opus. There is a strong bass line and trance chord progressions that echo Coltrane’s masterpiece. The result is something you would expect from Neu! or Harmonia. The flip side is a reinterpretation of Alice Coltrane’s (John’s wife) composition “Journey in Satachidanada” by the Earthling Society. This cover is similar in emotion to Alice’s original but with a more Krautrock and psychedelic atmosphere, much akin to Acid Mothers Temple’s extended jams. If you were completely unfamiliar with the Coltrane’s work, you would never imagine that these two tracks were covers of avant-garde jazz compositions. These two bands have one-upped Coltrane, but the music may not appeal to Coltrane aficionados. For those lucky enough to purchase this disc, there will be a bonus CD containing a remix of Superfjord's track by Astralasia, a live version by Superfjord, a remix of Earthling Society's track by Skam label's VHSHead, two new recordings by Superfjord and Astralasia that are inspired by John Coltrane's music, and a brand new Earthling Society song. Unfortunately this bonus CD was not part of the promo package, so I will have to wait along with everyone else to hear this additional music.