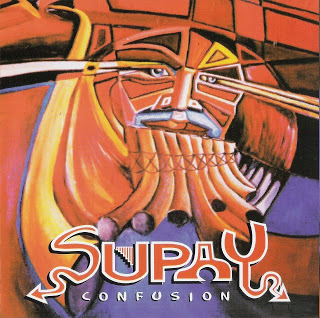 Peru's Supay (named after evil spirits of Quecha-speaking natives) is almost two bands rolled into one. On one side is a rock quartet built around the guitar playing of Luis Proaño, along with keyboards (Gustavo Valverde), bass (Renzo Dauser), and drums Neto Pérez (drums). This ensemble favors warm, vintage rock with some light symphonic elements in the arranging, akin to Camel circa Mirage. On the other side are the indigenous woodwinds of Williams León and Alex Valenzuela who cover everything including quena, quenacho, zampoña, bastos, taca, and toyo. Theirs is a folky and almost new-age-y sounding persona. Put the two together and you have something genuinely unique. When the woodwinds join on the rock pieces these guys sound like a Peruvian version of vintage Jethro Tull. As the group's founder, Proaño clearly intended Supay to be an outlet for his guitar playing and he never fails to grab the spotlight when the opportunity presents itself. His playing is rooted in standard blues rock technique, though he tries on several occasions to stretch out into jazzier modes, echoing Steve Howe's early work with Yes, though lacking Howe's prowess on the instrument. Proaño also occasionally lapses into some pointless meandering clearly meant as open-ended jamming, though again some maturity in the studio and as an arranger will help tighten up these loose connections. The band has suffered some shakeups since this album was recorded, though if this is any indication there's loads of potential here if they can hold the core elements together.