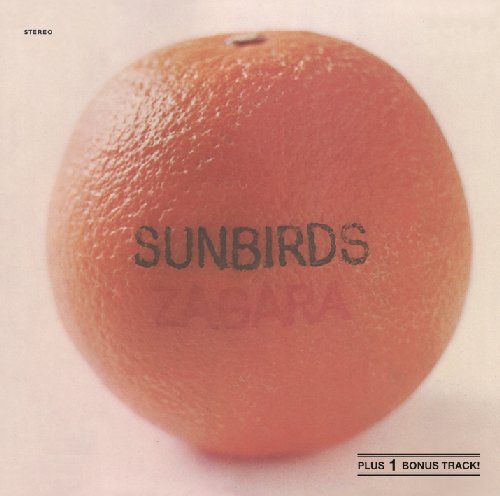 Sunbirds was a short-lived (relatively speaking) jazz-rock outfit from Munich led by drummer Klaus Weiss and featuring a cast of great jazz musicians from many different countries. They left only two recordings behind: their self-titled debut from 1970, and Zagara, their second from 1972. Between the two albums, the lineup changed some, and the band’s sound changed somewhat as a result, though the mainstays of the original band – Weiss, keyboard player Fritz Pauer, American upright bassist Jimmy Woode, and Dutch flutist Ferdinand Povel were all still in place, though hotshot guitarist Philip Catherine had moved on, and was replaced by either Lucas Costa or Rafael Waeber, track depending, and percussionist Juan Romero was replaced by American conga player Norman Tolbert. New to the group were Polish flutist Leszek Zadlo, and American electric bassist Ron Carter, who by that time had played with everybody and their brother in US jazz circles (Eric Dolphy, Don Ellis, Miles Davis quintet, and many more). The album opens with “Fire Dance,” a Pauer composition, a piece that was originally recorded for their first album and left off due to lack of space; the band re-recorded it with the new lineup and it stands as one of the strongest pieces here. The title track is a tasty rhythmic piece with prominent hand drums and doubled flutes carrying a unique melody. “Ocean Song” has a decidedly latin flavor with beatiful flute melodies, and the eleven mimute “African Sun” closes the original album out, driven by a great piano groove and a lot of imprivisation, at times dropping into a spacy, dreamy mode, making it the long track worth waiting for at the end. A few tracks, including “Homecoming” and “Still Pointing” (both written by Woode) fall into the happy jazz category, bouncy tunes with melodies that seem a little too familiar, in fact the latter sounds more like the intro backing track for an early-70s TV sitcom; “I Don’t Need” by Pauer fares a little better, but none of these three sound like they belong here, especially when the first album was such a muscular effort. The two-minute bonus track “Mbira” is a group improvisation on the African instrument, a fitting conclusion to an album with many brilliant strengths and a few weaknesses. Following this, the band split and went their different ways, some of which is documented in the 32 page booklet with many rare photos.