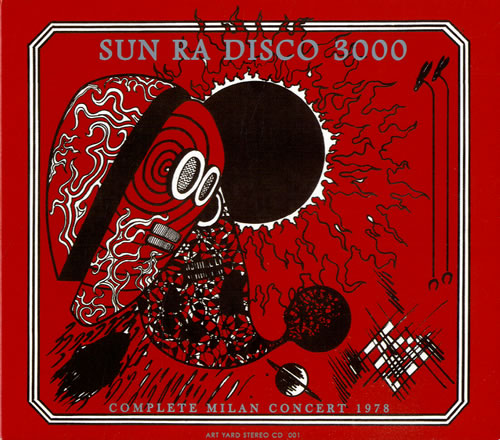 Most of the Sun Ra I’ve heard before (and I’m far from an expert on his extensive catalog) was in large ensemble settings. Here we get an Italian quartet gig from 23 January, 1978, featuring the leader on piano, electronic keyboards, and rhythm machine, along with cohorts John Gilmore on saxes, Luqman Ali on drums, and Michael Ray on trumpet; June Tyson joins on vocals at times. Initially, the music leans heavily towards the free end of the spectrum, with a steady pulse only making incidental appearances. But in typical eclectic Ra fashion, the spaced-out jamming is counterbalanced by some composed parts, notably the lovely “Echos of the World” (yes, that’s how it’s spelled), with some comparatively conventional piano from Ra and some great sax from Gilmore. Ra hangs out on the piano for quite a while, through “Germinology” and “Sky Blues,” both of which work into loose swinging grooves, reminding us that these guys have a firm grasp on the entire history of jazz. The original LP release featured only three tracks, including the side-long title track, which is the wildest part of the concert. Certainly those who heard the original version missed out on some of the incredible variety to be had, especially the previously mentioned piano-based tunes, and “Spontaneous Simplicity,” with its slinky synthesizer groove – not quite funky, but headed that way – and trumpet showcase. Of course, no Sun Ra album would be complete without some goofy chanting: this lengthy set only features a bit of “Space is the place” near the beginning and “We travel the spaceways from planet to planet” at the very end. If you’re like me and don’t really know where to begin with this mind-bogglingly prolific artist, you could probably do worse than this fun and interesting set as a representative of the late 70s.