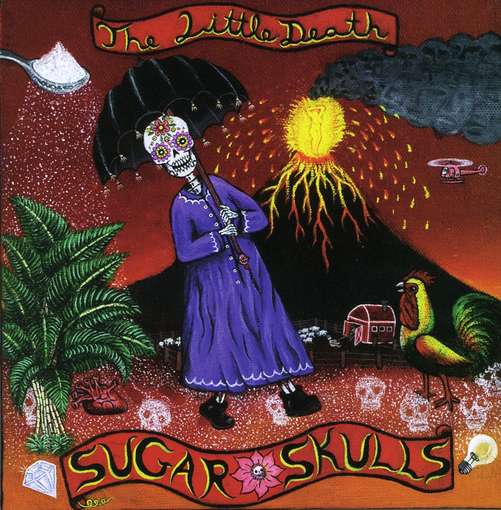 This CD is some serious fun. Serious because the musicians really know what they're doing, both in the composing and playing. Fun because they have a playful (though adult) sense of humor about their material. The end result is in some ways comparable to other bands labeled as "math-rock" - especially those who also have some tendencies toward classic progressive rock as well. But mostly, Sugar Skulls are off in their own world. When listening to the music the first time, there's so much happening that the lack of a guitar in the lineup (keyboards, violin, bass, drums) might not be immediately apparent, though it does figure prominently in the band's identity. Keyboards provide the foundations of the tunes, with Henrietta Fox Nebel supplying a variety of tone colors to set the stage. The electric violin is a frequent spotlight stealer - Julie Baldridge is exceptionally creative and skilled, whether playing her instrument with a natural sound or with effects. With so much going on, you might not notice Ursula Beatrice Stuart's bass immediately, but when you do, you'll be impressed. (Having seen the band live, I can attest that she's a monster player.) Both Fox Nebel and Stuart sing, taking different parts as the songs tell their stories, having the kind of dramatic delivery that reminds me of 80s Art School bands like Human Sexual Response and The Stick Men (not Tony Levin's band). Musically, obviously some Zappa figures in their likes, as well as some RIO and even Björk. There's some similarity to Charming Hostess, though without the Eastern European flavor. Both complex and accessible, Sugar Skulls are a strong musical presence, and I hope they can continue to produce recordings as strong as this one.