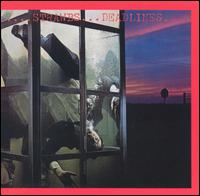 Deadlines was the last album by the third incarnation of the Strawbs. It was their most progressive work since 1975's Ghosts, when prominent keyboard work (then from John Hawken, ex-Renaissance and Illusion) was more integral in the band. Led by mainstay vocalist and songwriter Dave Cousins, this disc starts out very aggressive and maintains a high level of intensity through out the nine songs. Rockers such as the opening cuts, “No Return” and “Joey and Me,” and even “The Last Resort,” have the inimitable stamp of Dave Lambert's edgy rhythm guitar and solo leads. The group at this time was still shifting toward more acceptable, but complex rock which was touching the fringes of progressive. Cousins and Lambert even trade lead vocals within several songs, which adds to a more group context for the tracks. There are only a couple of overtly throwaway pop tunes to skip over this time (unlike the previous three studio outings). Cousins' penchant for writing moody lovestruck songs with a sardonic twist are evident in “Sealed with a Traitor's Kiss” and “Deadly Nightshade.” Tony Fernandez was the new kid on the block at drums having joined the group for this project after a short stint playing on Rick Wakeman's White Rock. But it's “Time and Life” and “Words of Wisdom” that indicate the group stretching out with a subtle, embedded keyboard sound along with forceful vocals and lyrical content. Robert Kirby and John Mealing give ample support on the entire disk switching between organ, Polymoogs, Mellotron, and piano.